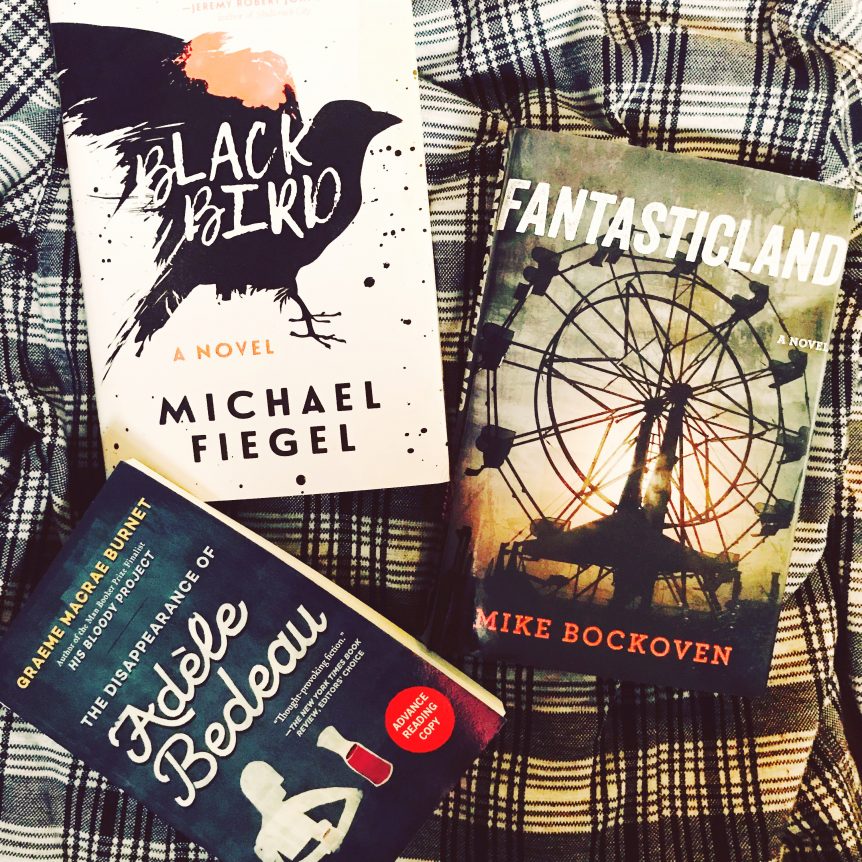 I am fortunate enough to have made some amazing friends on bookstagram! One of my book besties, Jennifer, tagged me and and our other book bestie, Lindsey in a Skyhorse Publishing HAUNTED HALLOWEEN GIVEAWAY and we won!! I feel so very lucky to have met both of these ladies! Thank you so much to Sarah, Jenn, and Perri with Skyhorse Publishing for this awesome package of books! We really hit the jackpot and I’m excited to read all of these!!

Check out the book descriptions below:

BLACKBIRD: A NOVEL by Michael Fiegel –

A cold-blooded killer-for-hire, Edison North drifts across America from city to city, crime scene to crime scene, leaving behind a world in flames. But during a seemingly random stop at a fast food restaurant, Edison meets Christian, a young girl who mirrors his own sense of isolation and stink of “other.” Though it’s been a long time since he felt anything resembling a human connection, something about this desperately lonely child calls to him like a fallen nestling. Edison feels certain she deserves better. And while he is not convinced that he can give her that, he can teach her to fly on her own. So he takes her.

Thus begin the chronicles of Edison North―and his protégé. Weaving together past and present, Edison begins Christian’s strange apprenticeship as Christian looks back upon her fractured upbringing and the training that made her into the killer she’s become. What emerges is a savage―and ultimately tender―exploration of the unlikely bond between two outsiders: a fledgling assassin and the man who took her under his wing.

FANTASTICLAND: A NOVEL by Mike Bockoven –

Since the 1970s, FantasticLand has been the theme park where “Fun is Guaranteed!” But when a hurricane ravages the Florida coast and isolates the park, the employees find it anything but fun. Five weeks later, the authorities who rescue the survivors encounter a scene of horror. Photos soon emerge online of heads on spikes outside of rides and viscera and human bones littering the gift shops, breaking records for hits, views, likes, clicks, and shares. How could a group of survivors, mostly teenagers, commit such terrible acts?

Presented as a fact-finding investigation and a series of first-person interviews, FantasticLand pieces together the grisly series of events. Park policy was that the mostly college-aged employees surrender their electronic devices to preserve the authenticity of the FantasticLand experience. Cut off from the world and left on their own, the teenagers soon form rival tribes who viciously compete for food, medicine, social dominance, and even human flesh. This new social network divides the ravaged dreamland into territories ruled by the Pirates, the ShopGirls, the Freaks, and the Mole People. If meticulously curated online personas can replace private identities, what takes over when those constructs are lost?

FantasticLand is a modern take on Lord of the Flies meets Battle Royale that probes the consequences of a social civilization built online.

THE DISAPPEARANCE OF ADÈLE BEDEAU by Graeme Macrae Burnet –

Manfred Baumann is a loner. Socially awkward and perpetually ill at ease, he spends his evenings quietly drinking and surreptitiously observing Adèle Bedeau, the sullen but alluring waitress at a drab bistro in the unremarkable small French town of Saint-Louis. One day, she simply vanishes into thin air and Georges Gorski, a detective haunted by his failure to solve one of his first murder cases, is called in to investigate the girl’s disappearance. He sets his sights on Manfred.

As Manfred cowers beneath Gorski’s watchful eye, the murderous secrets of his past begin to catch up with him and his carefully crafted veneer of normalcy falters. His booze-soaked unraveling carries him from Saint-Louis to the back alleys of Strasbourg. Graeme Macrae Burnet’s masterful play on literary form featuring an unreliable narrator makes for a grimly entertaining psychological thriller that questions if it is possible, or even desirable, to know another man’s mind.