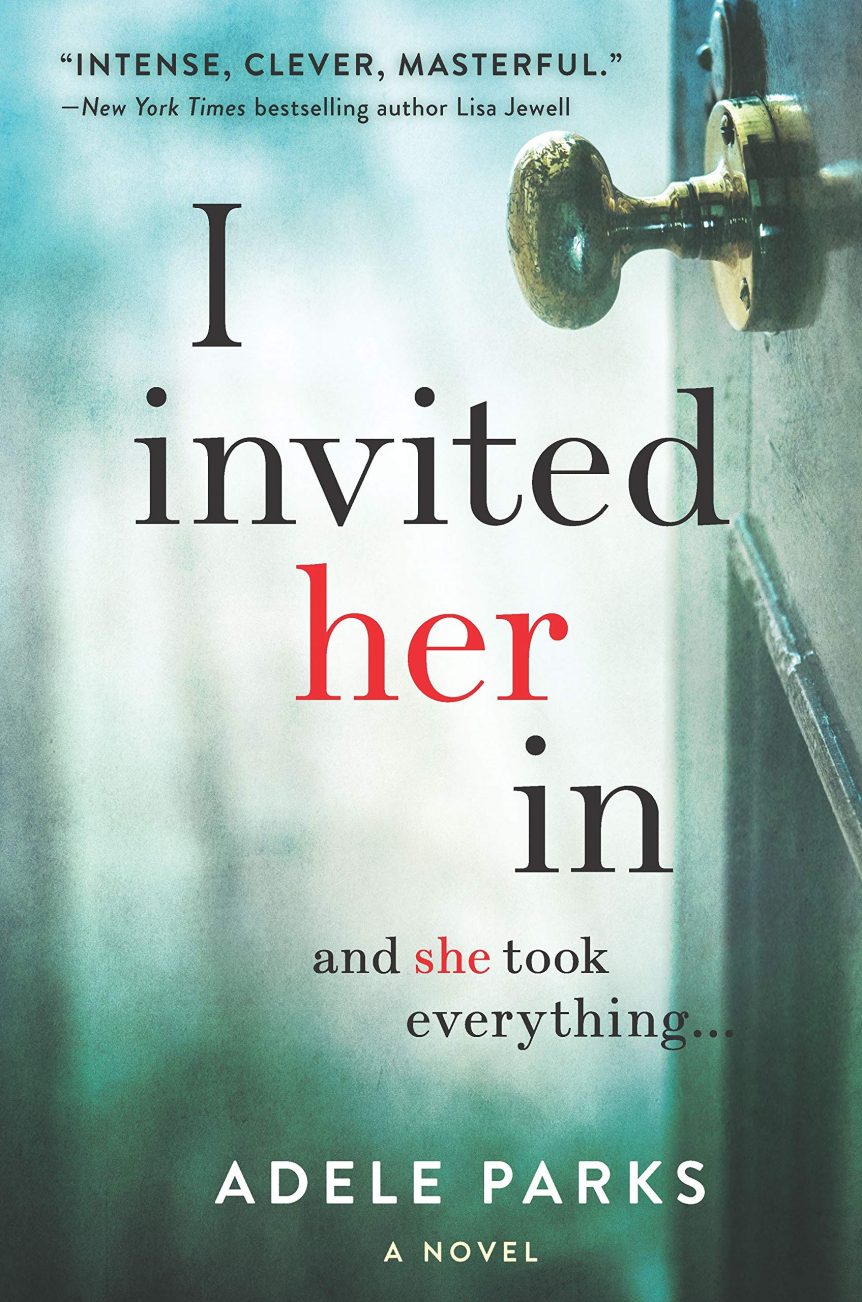 When TLC Book Tours reached out to me to share an excerpt of I Invited Her In, I knew I had to jump on it! It looks so addictive and I cannot wait to get a copy of the book! Check out below for a description, excerpt, and link to pre-order your copy!

Imagine the worst thing a friend could ever do.

When Mel receives an unexpected email from her oldest friend Abi, it brings back memories she thought she had buried forever. Their friendship belonged in the past. To those carefree days at university.

But Abi is in trouble and needs Mel’s help, and she wants a place to stay. Just for a few days, while she sorts things out. It’s the least Mel can do.

After all, friends look out for each other, don’t they?

I Invited Her In is a blistering tale of wanting what you can’t have, jealousy and revenge from Sunday Times bestseller Adele Parks.

Adele Parks one of the most-loved and biggest-selling women’s fiction writers in the UK. She has sold over 3 million books and her work has been translated into 25 different languages. She has published 15 novels in the past 15 years, all of which have been London Times Top Ten Bestsellers.

Adele was born in the North East of England, in 1969. She enjoyed a traditional 1970’s childhood, watching too much TV and eating convenience food because nobody minded if kids did that in those days. Since graduating from university, where she studied English Language and Literature, she worked in advertising and as a management consultant. In 2010 Adele was proud to be awarded an honorary doctorate of Letters from Teesside University.

Suddenly Abi looks serious and intense. She reaches for my hand, looks me in the eye and says, “Thank you for having me. You’ve saved my life.”

“Don’t be daft.” It’s an expression, right? I mean, I know it is, except that her eyes are all dewy.

“I’m not being daft. I’m one hundred per cent serious. If you hadn’t responded to my email, I don’t know what I would have done. I really don’t. You, inviting me here, it gave me a purpose.”

I pat her hand and mumble about being “happy to help. It’s the least I can do.” And it is. It really is.

Abigail lay in the funny box room on the lumpy sofa bed and wondered how her life had come to this. It was humiliating, unfair.

Her suitcase barely squeezed into the room. There certainly wasn’t space to hang everything she’d brought with her, even though she’d only brought a fraction of what she owned. She hadn’t known what to expect. Not exactly, but whatever it was, it was not this. On her plane journey to England, she had thought of the last time she saw Melanie Field, now Melanie Harrison. She’d been a nursing mother. Drab, tired, strangely ashamed. Abi hadn’t known what to say to her then. It had seemed easier not to say anything at all. For years.

But here she was, invited back to the very bosom of Mela­nie’s life, on the back of just one email after seventeen years. It was almost too easy. So, Mel hadn’t been able to resist throw­ing her doors wide open, despite holding them fast shut for so many years. Was it because Abi was famous? People loved her celebrity. Or was it pity? Guilt? Abi had laid herself open in the email. It would have taken a hard woman to ignore the plea for friendship and support, at such a difficult time. Mel had never been hard. She’d been determined, resilient, sometimes even selfish, but not hard. Abi had counted on it.

Yes, here she was, in the very heart of the family. Naturally, Abi had friends in Los Angeles who had families, but they also had nannies and pools and space. Melanie had none of that.

Abi’s senses had been assaulted all evening as she was absorbed into their home. The house was shabby, cluttered, noisy, chaotic. There were things everywhere. Just so many things. Toys, books, ornaments, cushions, candles, pens, cards, pictures and clothes, which came in every variety: clean, dirty, ironed, crumpled.

Hilariously, Ben said Mel had been manically tidying in an­ticipation of Abi’s visit; she couldn’t even imagine what it must have looked like before. They didn’t have much money to throw about, that was obvious. With the notable exception of the hall­way, which had been recently (badly) decorated, every other wall was in dire need of a freshen-up. Carpets were worn thin on the stairs, there was a stain on the sofa, the crockery was pretty but she’d spotted two bowls with chips.

Also, it was so loud. The TV was always on, even when no one was in the sitting room, the same went for the radio in the kitchen; besides that, the girls squealed, shouted, sang, argued or laughed pretty much all the time, literally non-stop. Mel and Ben took it in turns to yell up the stairs as they tried to capture someone’s attention; only Liam had any sense of serenity.

And the smells. Obviously, Mel had lit a few candles before Abi arrived but underneath that were the scents of the family bashing and clashing up against each other in the house. She could smell the baking that had taken place in her honour, the tomatoes, basil, fried mince in the bolognese sauce, the substrate in the hamster’s cage, the urine in the cats’ tray. She could also smell the people. The little girls’ bubble bath, Ben’s aftershave, Mel’s hairspray, Liam’s youth.

Abi was dizzy with the energy in the family home. The mys­tery as to why Melanie didn’t post much on Facebook had been solved though: there was nothing much to brag about.

Well, they all looked good. Not Mel. She had once been pretty but was now diminished; she didn’t take care of herself as she ought. Ben, however, was quite something. Undeniably handsome. And the son. Beautiful. Youthful. Perfect. The girls were a treat to look at, too. Adorable. And while the house was shabby, cluttered, noisy, chaotic, it was also so obviously fun. Happy. Loving. While it was noisy, the sound that was heard most often was laughter. And the smells: a vibrant, potent con­trast to the sterility of her own home, that rarely smelt of any­thing other than cigarette smoke or cleaning fluids (on a Tuesday and Friday when the maid visited).

Melanie’s house was ugly. Yet, on some level Abi loved it.

Melanie’s house was beautiful on so many levels. Abi hated it.