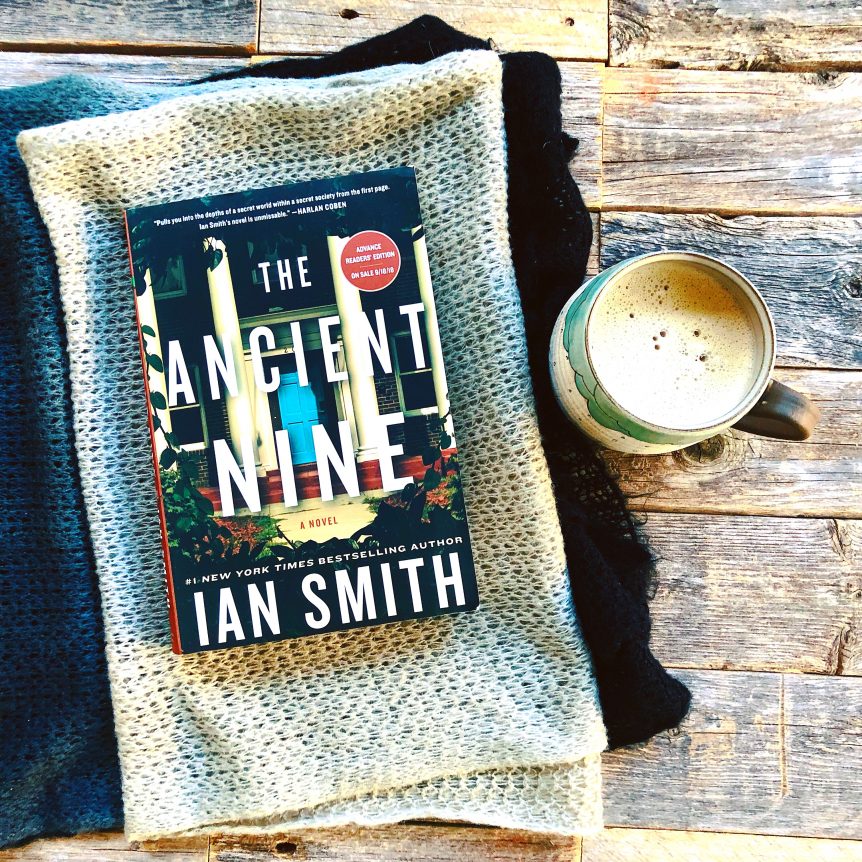 Thank you so much St. Martin’s Press for inviting me to participate in the blog tour and my free review copy – all opinions are my own.

Spenser Collins is an unlikely Harvard prospect and Dalton Winthrop is a white-shoe legacy at Harvard. The two find enough common ground to become friends, cementing their bond when Spenser is “punched” to join the Delphic Club, one of the most exclusive of Harvard’s famous all-male final clubs. Founded in the nineteenth century, the Delphic has had titans of industry, Hollywood legends, heads of state, and power brokers among its members. Dalton Winthrop knows firsthand that the Delphic doesn’t offer memberships to just anyone. His great-uncle is one of their oldest living members, and Dalton grew up on stories of the club’s rituals. But why is his uncle so cryptic about the Ancient Nine, a shadowy group of alums whose identities are unknown and whose power is absolute? They protect the Delphic’s darkest and oldest secrets―including what happened to a student who sneaked into the club’s stately brick mansion in 1927 and was never seen again.

I enjoyed this complicated mystery and loved putting the puzzle pieces together to solve an intriguing old murder. A book filled with secret societies, libraries, and academia with meticulous writing and unique characters? Sign me up!

The story begins in fall of 1988. An unlikely sophomore, Spenser Collins, who’s intelligent, an extraordinary athlete, but not among the rich, white, and elite, attends Harvard University. Spenser is best friends with Dalton Winthrop, who is a legacy at Harvard, as well as to the Delphic Club, also known as the Gas. Spenser is taken aback when he is “punched” to join one of Harvard’s most exclusive and prestigious clubs. Dalton grew up hearing all about the Delphic Club and its secrets, including that of the Ancient Nine, which no one really knows for certain of its existence. The Ancient Nine is a secret chamber of alums who harbor the oldest living secrets and Dalton believes his great-uncle is a member. After Spenser receives his invitation, he becomes obsessed and tries to solve an age old mystery.

I love Spenser’s character as he’s multidimensional, genuine, relatable, and it was interesting to learn the Harvard experience from a black male perspective in a predominantly white school. I enjoyed the love story that develops between Spenser and Ashley, a girl who works at the university to pay her way through community college. The mystery of the Ancient Nine is shadowy, gripping, and solve-worthy. The research, historical references, secrets, hidden rooms, and a club within a club, are all so compelling and fascinating. Of course, in these exclusive, wealthy clubs there’s way too much indulgence, misogyny, and female objectification but I believe it to be a realistic account of how things were in the 1980s. Smith himself was a member of a final club at Harvard so his expertise and attention to detail do not go unnoticed. The writing is rich, keenly sharp, and intricately detailed – I could not stop reading. Most of all, I enjoyed the “based on truth” aspect. A brilliant mystery with fantastic history.

Dr. Smith was appointed by President Obama to a second term on the prestigious President’s Council on Fitness, Sports, and Nutrition. He is currently the medical contributor and co-host of the nationally syndicated television show The Rachael Ray Show.

He is a former co-host of the Emmy award winning syndicated daytime talk show, The Doctors.  He also served as the medical/diet expert for six seasons on VH1’s highly-rated Celebrity Fit Club, and is the creator and founder of the national health initiatives The 50 Million Pound Challenge and The Makeover Mile.  Dr. Smith is the former medical correspondent for NBC News network and for NewsChannel 4 in New York, where he filed reports for NBC Nightly News and The Today Show as well as WNBC’s various news broadcasts.  He has appeared extensively on various broadcasts including The Oprah Winfrey Show, The View, Dr. Oz, Steve Harvey Show, The Talk, Larry King Live, Anderson Cooper 360, CNN, MSNBC and many more. He has written for various publications including Time, Newsweek, Men’s Fitness, and the New York Daily News, and has been featured in several other publications including, People, Redbook, Details Magazine, Essence, Ebony, University of Chicago Medicine on the Midway, Cosmopolitan, and Black Enterprise.

A highly-sought after speaker, Dr. Smith’s work has been honored by several organizations, including the National Academy of Television Arts & Sciences for his coverage on the momentous events beginning on Sept. 11, 2001.  He is also very active in charitable causes.  Dr. Smith has also served on the boards of the American Council on Exercise, the New York Mission Society, the Prevent Cancer Foundation, The New York Council for the Humanities, and The Maya Angelou Center for Health Equity.

Dr. Smith graduated from Harvard College with an AB and received a master’s in science education from Teachers College of Columbia University. He attended Dartmouth Medical School and completed the last two years of his medical education and graduated from the University of Chicago Pritzker School of Medicine.

Dr. Smith is the author of 15 books, 8 of them New York Times Bestsellers including The Clean 20, Blast the Sugar Out, SUPER SHRED: The Big Results Diet, SHRED: The Revolutionary Diet, The Fat Smash Diet and Extreme Fat Smash.  He is also the author of the critically acclaimed The Blackbird Papers (2005 BCALA fiction Honor Book Award winner.)

Dr. Smith is the creator of the SHRED brand which includes SHRED Pop Popcorn and SHRED Bars with other products in development.