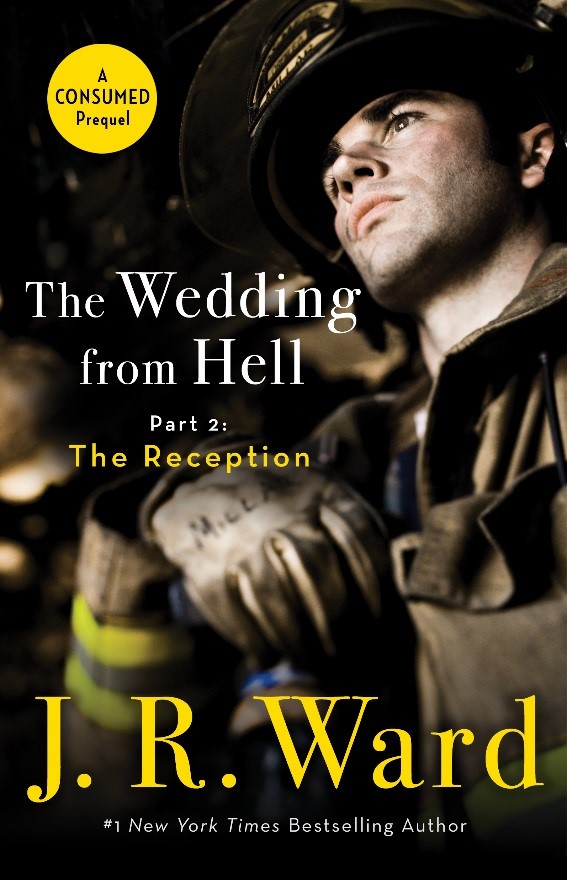 The Wedding from Hell, Part 2: The Rehearsal Dinner is the exciting second adventure in J.R. Ward’s three-part ebook serialization: The Wedding From Hell. This exclusive prequel to her upcoming standalone suspense, Consumed (available in Fall 2018) takes us back to the night steamy arson investigator Anne Ashburn and ‘bad boy’ firefighter Danny Maguire will never forget.

The Wedding From Hell, Part 2: The Reception: As the wedding from hell continues, Anne and Danny find themselves walking the delicate balance between professional distance and explosive attraction. Will the desire they feel last through the night and change their lives? Or are they doomed to part after one night of passion?

T minus 2 hours ’til blastoff

Anne Ashburn had never had veil envy, as they called it. As a young girl, she had never pictured herself walking down an aisle in a white dress, ready to be rescued by a knight-in-shining-armor groom who was going to take charge and take care of her for the rest of her life.

Nope. Anne had wanted to fight fires like her father and then her brother. Even though she no longer respected the former, and had a strained relationship with the latter, she’d wanted to pull on turnouts and strap an air tank to her back and breathe canned air as she ran into open flames dragging hundreds of pounds of charged line with her. She’d wanted to rescue grandmothers, and children, and people who had succumbed to smoke inhalation. She’d been ready to cut open crumpled cars and drag broken bodies out of wreckage at the sides of highways. She’d been determined that the extremes of cold winter nights, hot summer days, physical exhaustion, and mental fatigue would never keep her from doing her job.

So, yup, the old fashioned Mrs. degree had never held any fascination for her. There was no way in hell she was going to be like her mother, living a derivative, nineteen-fifties version of life, nothing but a pretty blow-up doll that was expected to cook, clean, and cut the yapping.

On that note, as she pulled into St. Mary’s parking lot and looked up at the great cathedral’s stained glass windows and lofty spires, she decided it made sense that not only was she not the bride, she wasn’t even a bridesmaid.

Like the rest of the crew down at the 499 firehouse, she was a groomsmen in the impending nuptials of Robert “Moose” Miller and Deandra—what the hell was her last name anyway? Cox. That was it.

Anne was thinking groomsmen was a role she might as well get used to. Not that Duff, Emilio, Deshaun, or any of the other men she worked with were settling down anytime soon.

Right on cue, a Ford truck entered the parking lot, the late afternoon sun flashing across its windshield.

As Anne’s heart kicked in her chest, she was tempted to hustle in the side door of the church—but she had never been one to run from a challenge.

Danny was more than just a challenge, though.

And okay, fine. So maybe she had already run out of his way at least once: Last night, at the rehearsal dinner, she’d positively bolted after he’d made that speech of his.

I never believed in love . . . I thought it was just a word, a title folks gave to daydreams and misconceptions about destiny, a lie folks told to themselves to make them feel solid in this imperfect, unreliable, and mean-ass world.

So, let’s toast to love.

Everybody else had toasted Moose and Deandra. But Anne had known it hadn’t been about them. Danny, ever the ladies man, king of the one-night stand, he who shalt never be tied down . . . seemed to be suggesting not just that he’d had a change of heart.

But that he might have given his own to Anne.

Unless she was misreading everything? Then again, they had kissed the night before that. In her living room. While riding an adrenaline high after they’d saved a life in an alleyway.

And lips-to-lips had been better than good, the rare circumstance when reality had improved on a fantasy. After two years of attraction and sizzle and unacknowledged heat, that which had been pushed under the rug was exposed now. And there was no going back.

Especially as she felt the same way.

So hell yeah she had bolted out of that restaurant. The second she had been able to get up from her chair, she had hit the exit and left Danny without a ride home.

Timeout where the crew always went, the noise in the background loud and raucous.

She had not answered. He had left a short message, but not called again.

Refocusing, she watched Danny’s truck pass by. From behind the wheel, he looked over at her.

She waited for him to find a space and get out, and as he walked across to her, she tried—tried—not to go sixteen-year-old girl at the sight of him in a tuxedo.

He was very tall, over six feet five, and he was built hard and muscular, his shoulders so wide, his chest so broad, his waist the point of the inverted triangle of his torso. His jet-black hair was still damp, and what sunlight there was in the mostly cloudy sky flashed blue in its depths. He was freshly shaven—his cologne reaching her nose even before he stopped in front of her—and his eyes were that brilliant blue that had always arrested her. Irish eyes.

But they were not smiling.

For a man who was rarely serious, he looked positively grim, and she frowned.

Standard answer for firefighters when they were in pain. And she wondered if it had to do with that speech of his, and what she could have sworn he had been telling her.

His eyes shifted off to the side and then his mouth got thinner.

“And here’s the blushing bride.”

A stretch limo entered the parking area and made a fat turn toward the back door of the cathedral. When it stopped, its driver got out and went to the rear door.

Seven all-in-pink, spray-tanned, body-glittered, and blond-streaked women got out one by one, a clown car of bridesmaids who were such carbon copies of each other, it was like they had been ordered out of a catalogue.

And then the white dress emerged.

Deandra, Moose’s intended, had her blond-streaked hair—natch—piled up on her head in an organized, sculpted waterfall of curls. Her veil was a gossamer fall over her tiny waist and her big skirt, and the shimmer of crystals across the bodice and down the front and sides of the gown made her look like a princess.

Provided you didn’t catch her expression.

She was sour as an old woman with gout and shingles. In spite of the fact that she was supposedly marrying her true love, she looked downright nasty as she snapped at the driver, glared at her maid of honor, and yanked her skirting up to march into the back of the church.

“Whatever. They’re on their own with this dumbass idea.”

“Did you happen to talk to Moose last night?” she blurted.

“As in out of this? Or would that be considered tacky given it was less than twenty-four hours before the priest hit the altar with them.”

Danny rolled his eyes. “He’s bound and determined to ball-and-chain himself. Personally, I’d be running in the opposite direction.”

And then there was silence between them. Tension coiled up quick, and as Anne’s temples started to pound, she decided it was going to be a long night, just not for the reasons she’d assumed at the beginning of the weekend.