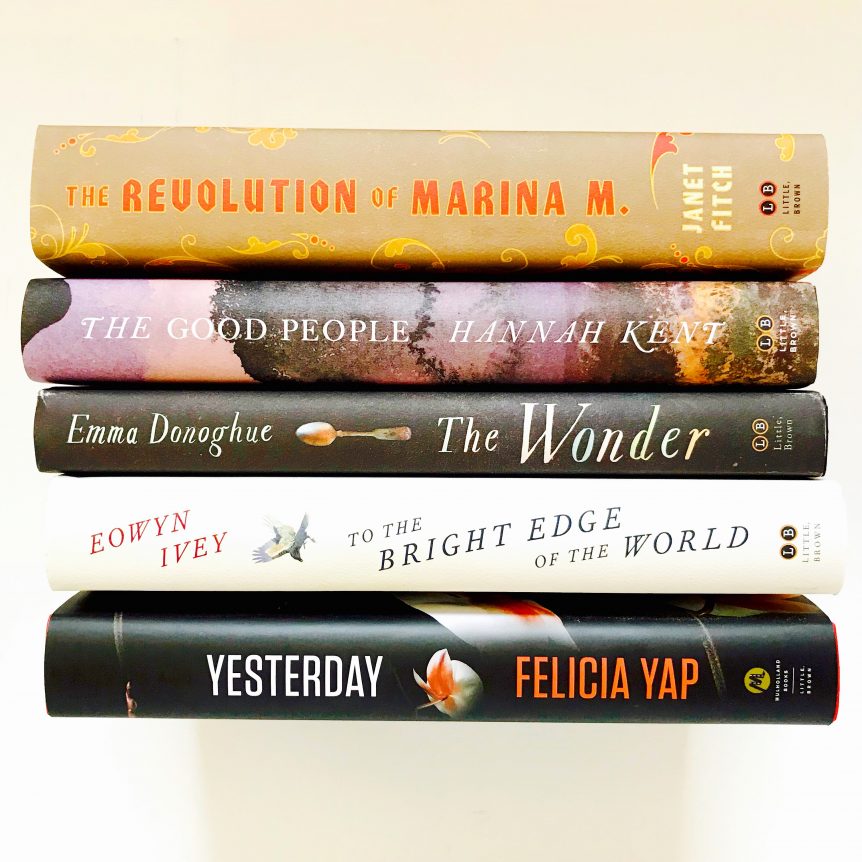 Would you look at these GORGEOUS books?!! Thank you so much to Lauren from Little, Brown and Company for these free copies. I am so excited to read these!

THE WONDER by Emma Donoghue –

In the latest masterpiece by Emma Donoghue, bestselling author of Room, an English nurse brought to a small Irish village to observe what appears to be a miracle-a girl said to have survived without food for months-soon finds herself fighting to save the child’s life.

Tourists flock to the cabin of eleven-year-old Anna O’Donnell, who believes herself to be living off manna from heaven, and a journalist is sent to cover the sensation. Lib Wright, a veteran of Florence Nightingale’s Crimean campaign, is hired to keep watch over the girl.

Written with all the propulsive tension that made Room a huge bestseller, THE WONDER works beautifully on many levels–a tale of two strangers who transform each other’s lives, a powerful psychological thriller, and a story of love pitted against evil.

THE GOOD PEOPLE by Hannah Kent –

Based on true events in nineteenth century Ireland, Hannah Kent’s startling new novel tells the story of three women, drawn together to rescue a child from a superstitious community.
Nora, bereft after the death of her husband, finds herself alone and caring for her grandson Micheal, who can neither speak nor walk. A handmaid, Mary, arrives to help Nora just as rumors begin to spread that Micheal is a changeling child who is bringing bad luck to the valley. Determined to banish evil, Nora and Mary enlist the help of Nance, an elderly wanderer who understands the magic of the old ways.

Set in a lost world bound by its own laws, THE GOOD PEOPLE is Hannah Kent’s startling new novel about absolute belief and devoted love. Terrifying, thrilling and moving in equal measure, this follow-up to Burial Rites shows an author at the height of her powers.

TO THE BRIGHT EDGE OF THE WORLD by Eowyn Ivey –

In the winter of 1885, decorated war hero Colonel Allen Forrester leads a small band of men on an expedition that has been deemed impossible: to venture up the Wolverine River and pierce the vast, untamed Alaska Territory. Leaving behind Sophie, his newly pregnant wife, Colonel Forrester records his extraordinary experiences in hopes that his journal will reach her if he doesn’t return–once he passes beyond the edge of the known world, there’s no telling what awaits him.

The Wolverine River Valley is not only breathtaking and forbidding but also terrifying in ways that the colonel and his men never could have imagined. As they map the territory and gather information on the native tribes, whose understanding of the natural world is unlike anything they have ever encountered, Forrester and his men discover the blurred lines between human and wild animal, the living and the dead. And while the men knew they would face starvation and danger, they cannot escape the sense that some greater, mysterious force threatens their lives.

Meanwhile, on her own at Vancouver Barracks, Sophie chafes under the social restrictions and yearns to travel alongside her husband. She does not know that the winter will require as much of her as it does her husband, that both her courage and faith will be tested to the breaking point. Can her exploration of nature through the new art of photography help her to rediscover her sense of beauty and wonder?

The truths that Allen and Sophie discover over the course of that fateful year change both of their lives–and the lives of those who hear their stories long after they’re gone–forever.

Imagine a world in which classes are divided not by wealth or religion but by how much each group can remember. Monos, the majority, have only one day’s worth of memory; elite Duos have two. In this stratified society, where Monos are excluded from holding high office and demanding jobs, Claire and Mark are a rare mixed marriage. Clare is a conscientious Mono housewife, Mark a novelist-turned-politician Duo on the rise. They are a shining example of a new vision of tolerance and equality-until…
A beautiful woman is found dead, her body dumped in England’s River Cam. The woman is Mark’s mistress, and he is the prime suspect in her murder. The detective investigating the case has secrets of his own. So did the victim. And when both the investigator’s and the suspect’s memories are constantly erased–how can anyone learn the truth?
Told from four different perspectives, that of Mark, Claire, the detective on the case, and the victim–Felicia Yap’s staggeringly inventive debut leads us on a race against an ever-resetting clock to find the killer. With the science-fiction world-building of Philip K. Dick and the twisted ingenuity of Memento, Yesterday is a thriller you’ll never forget.

St. Petersburg, New Year’s Eve, 1916. Marina Makarova is a young woman of privilege who aches to break free of the constraints of her genteel life, a life about to be violently upended by the vast forces of history. Swept up on these tides, Marina will join the marches for workers’ rights, fall in love with a radical young poet, and betray everything she holds dear, before being betrayed in turn.

As her country goes through almost unimaginable upheaval, Marina’s own coming-of-age unfolds, marked by deep passion and devastating loss, and the private heroism of an ordinary woman living through extraordinary times. This is the epic, mesmerizing story of one indomitable woman’s journey through some of the most dramatic events of the last century.

Have you read any of these? Tell me what you think?