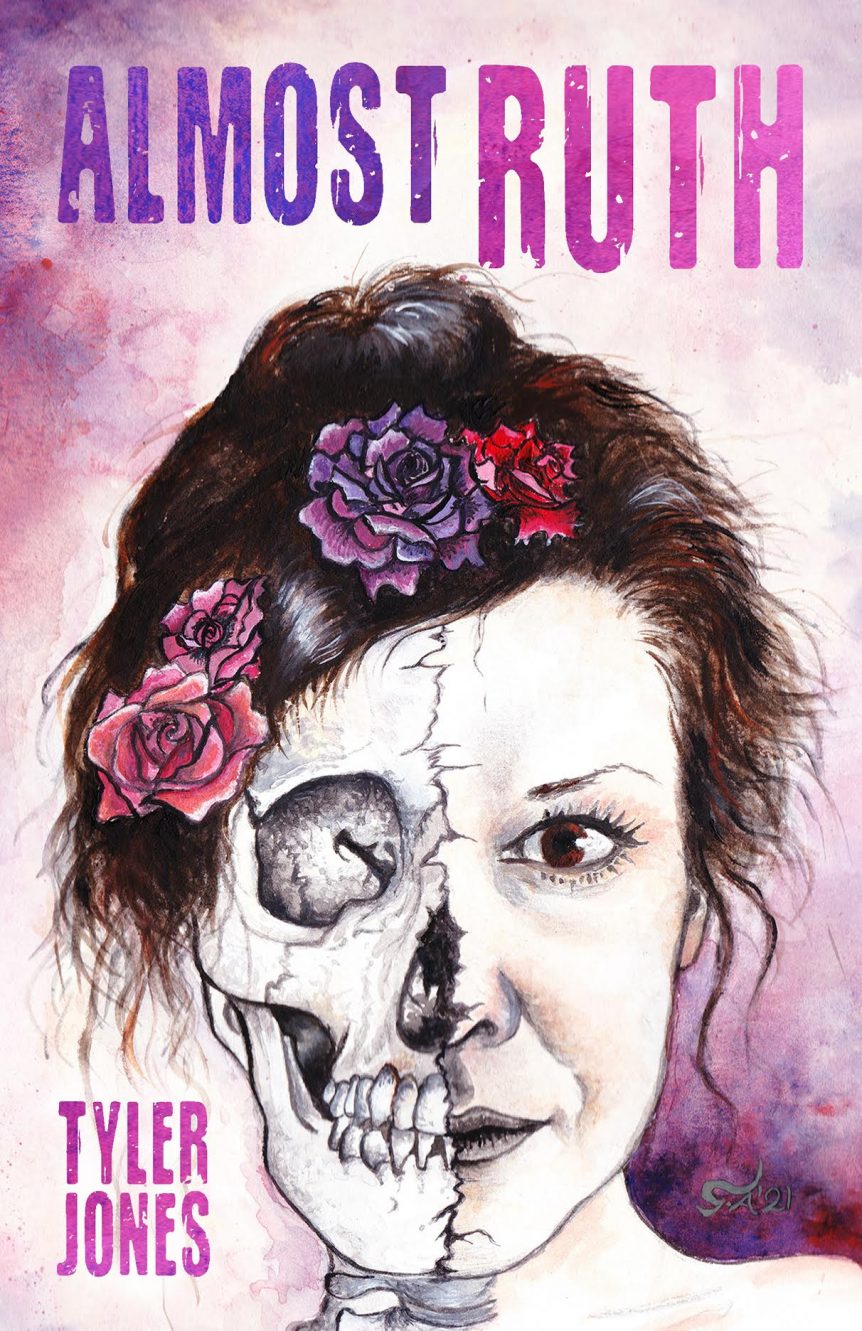 Ashville is a town with a secret history. Ancient structures lie hidden in the woods, and strange rituals are performed to keep the dead where they belong. For aging gravedigger Abel Cunningham, it is also a town of old regrets. And when Abel is tasked with an unusual burial, he discovers there are more than just corpses buried in the cemetery.

Set in an unsettling vision of the Old West, Almost Ruth is the new nightmare from the author of Criterium and The Dark Side of the Room. 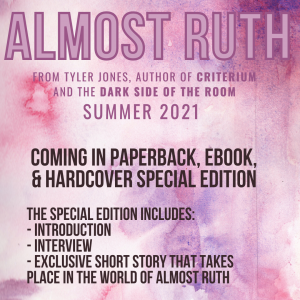 Except from Almost Ruth

The Festival of Stones

Not long after Ashville was founded, the early townspeople set out to mark the boundaries of their new land. Surveyors spent weeks walking every trail in the valley, mapping the snake-like twists of the river, exploring the mountain where Burke House would eventually be built. The man tasked with mapping the western woods was a young preacher named Cornelius Griffin, and it was he who discovered the hole and the stones.

Griffin was known by all to be an earnest man and passionate leader of his small church. Despite his youthful good looks and full head of dark, curly hair, Griffin was single, and many of the wives in town made it their mission to see him married before he turned thirty.

According the story passed down over the years since, Griffin had been alone in the western woods, wandering along the base of Mount Ashwood and jotting down notes about the landscape. The plan was to find where the forest ended, and discover what lay beyond. It was a significant task, and the preacher was not expected to return for several weeks. But only two nights after Griffin departed, a stranger came stumbling out of the woods. At first no recognized him. The man’s hair was as white as lamb’s wool, his eyes were cloudy, and his clothes were torn and covered in filth, as though he had been lost in the vast expanse of forest for days, if not weeks. The man was feverish and delirious, mumbling words that no one could understand. He was taken in by a family who fed and nursed him, and when the wife took the stranger’s dirty clothes to wash them, she discovered a notebook in the pocket of his jacket. A notebook that bore the name “Cornelius Griffin.”

The woman’s first thought was that this strange man had killed and robbed the young preacher, but after shaving and washing the dirt from his face, the woman recognized the man who had come out of the woods as Cornelius Griffin himself.

Because of the man’s illness, the townspeople could not ask what had happened on his journey, or why his hair had turned white. So they watched and waited, listening to him speak a strange language as he wrestled invisible enemies in the grip of fever dreams.

On the third day, Griffin’s fever broke and his eyes cleared, and he asked the townspeople to gather at the church so he could tell his story.

Everyone came to hear Griffin speak—men, women, and children all packed together in the small church until the crowd spilled outside. Griffin, now looking more like an elderly prophet than a young preacher, told the town that as he was exploring the woods, he had come across a clearing where he found a series of ancient structures, stones stacked upon stones in the shape of a pyramid. Only these pyramids were inverted so that the tip was in the ground and the base pointed up at the sky.

“Against the laws of nature,” Griffin told them. “They should have fallen centuries ago, but they still stood, balancing through some unknowable mechanism.”

The structures were solid, immovable. Five of them in all, scattered around a bare piece of land with a hole at the center. About six feet across, this perfect black circle went straight down into the earth, so deep Griffin could not see the end, and when he dropped a small rock into it, he could not hear it hit the bottom.

Griffin walked around the inverted pyramids, marveling at how they could stand. When he drew close and reached out to touch one, he described a feeling that passed over his skin, like the way the air feels before a lighting storm. Some invisible force prevented his hand from ever reaching the pyramid. He could get close, but something pushed back against him.

As the townspeople stood speechless, listening to the preacher’s story, Griffin told them how he had crawled on his belly to the edge of the hole and peered down into it. The light only reached a short distance before being overtaken by the dark. A cool breeze blew up out of the hole, the sour fragrance of dead flowers.

“But, I heard something else,” Griffin had said. “A voice, whispering to me from the depths.”

When the voice spoke, Griffin, backed away from the hole on his hands and knees, afraid to be so close to this hole that spoke his name. “A hole,” he said, “that looked like a throat in the earth.”

A chill like winter wind passed over his skin as the voice spoke again.

Lying there on the dead leaves of the forest floor, Cornelius Griffin did what the voice asked and listened.

“It not only knew my name,” Griffin told the crowd, “it knew my entire life. All of my triumphs and mistakes came out of this chasm. Then it told me of my future, of the things I would do, the people I would meet. The voice whispered of things that had happened, and things that had not yet come to pass.”

This young preacher with the white hair, he told them how the voice was neither male or female. It was simply a voice, and when it whispered the words appeared as a vibration in his head, as thoughts materializing like a finger writing messages in spilled salt.

“It gave me instructions,” he said. “Clear and precise. The voice told me that a bird would die very soon and I was to bury the creature in the soil.”

No sooner had Griffin heard the voice tell him this then a thrush fell out of the sky and hit the ground, legs still twitching, black eyes staring lifelessly. Griffin scooped out a shallow grave with his hands, then placed the dead bird inside and covered it up. He took a small stone and stuck it into the ground, upright.

The voice told him to be patient, to wait. Griffin lay his head on his bag and drifted into a dreamless sleep. When he awoke the following morning, the voice told him once again to Listen. To put his ear against the tiny headstone he made for the bird and Listen.

Griffin got on his belly, put his head close to the stone, and closed his eyes. He listened for what felt like minutes but all he heard was the wind rustling the tree branches, stirring the leaves. Then, like a distant echo, “as though it was coming from the bottom of a deep well,” was the sound of a bird chirping.

Griffin opened his eyes and looked up at the trees that surrounded him, but they were empty and silent. Breeze moved over the mouth of the hole in the ground and made low hum.

Do you hear? the voice asked.

Griffin listened again and heard the chirping, and his stomach twisted a little as he realized that the sound was the dead bird, singing its song from the place beyond life. Somehow sending that music across the void and into his head.

Death is not a loss, the voice said. It is a place. Come and see.

The young preacher crawled to the edge of the hole and peered down into it, and what he saw was not something he ever found the words to describe.

He explained to the townspeople that a new tradition was to be written down and practiced. All future burials of the dead were to have grave markers carved from stone that could be found in the northern mountains. These headstones should contain depictions of celestial beings with large wings. Each headstone should be unique and specific to the one over whom it would stand. Each year, on a set day, the loved ones of a deceased person were to chip off a small piece of the headstone and carry it in a procession to the hole Griffin had discovered in the forest. Then, one by one, the townspeople were to throw their pieces of headstone into the hole. The procession would then march to the cemetery where, if the loved ones were patient and diligent, they would hear the voice of the departed whispering from their headstone. In this way, the dead would never really be gone, and in this way the Festival of Stones was born.

Praise for Tyler Jones, Criterium, and The Dark Side of the Room

“I will absolutely pick up anything this guy writes. I found the writing, pacing and storytelling to be refreshingly sparse and yet filled with heavy vibrations of meaning, deep booming echoes of emotion. A triumphant piece of fiction.”

“…the strongest and most compelling new voice that I’ve read in a very long time.”

“Buckle up for a wild ride that will leave you bruised, shaken, and filled with dread. Tyler Jones is an author to keep an eye on.”

“(his) writing is painfully beautiful.”

“Tyler Jones knows how to hit you where it’ll hurt.”

“A haunting masterclass in storytelling.”

“This is a remarkable story, told with gut-wrenching details…Tyler Jones hits hard.”

“Jones’ prose in Criterium is like a shot of adrenaline to the heart.”

“Criterium is unpredictable, fast-paced, and bleeds with heart. Tyler Jones is one to watch.”

“An absolutely surreal read and is unlike anything else that I’ve read this year. Tyler Jones knocked it out of the park with this one.”

“Jones managed to write one of my favorite books of the year and I don’t say that lightly. His prose is flawless, the ambiance is stunning, and the story has a beautiful darkness.”

“Jones really knows how to create a universe that sucks you in deep then spits you out with such force, the real one looks a little different after.”

“The honesty of Jones’ writing is an open wound, suffering laid bare. And in that suffering is an overwhelming beauty.”

Tyler Jones is the author of CRITERIUM and THE DARK SIDE OF THE ROOM. His work has appeared in the anthologies BURNT TONGUES (edited by Chuck Palahniuk), ONE THING WAS CERTAIN, 101 PROOF HORROR, CAMPFIRE MACABRE, and PARANORMAL CONTACT, and in Dark Moon Digest, Coffin Bell, Cemetery Dance, LitReactor, and on The NoSleep Podcast.

His stories have been optioned for film.

He lives in Portland, Oregon. 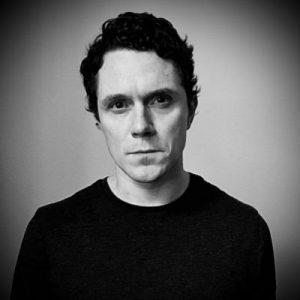 Gemma Amor is a Bram Stoker Award Nominated horror author, illustrator, amateur voice actor and podcaster, published independently and on Amazon. She writes genre-fluid, emotional and character driven horror. She has a background in Marketing, which, in her own words, is irrefutable proof that she has no soul.

Visit her website, which has links to all of her published work and according to Gemma, general brain-dribble of whatever’s happening in her repugnant little world. 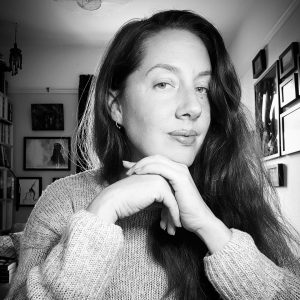 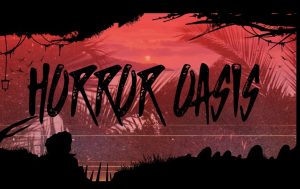