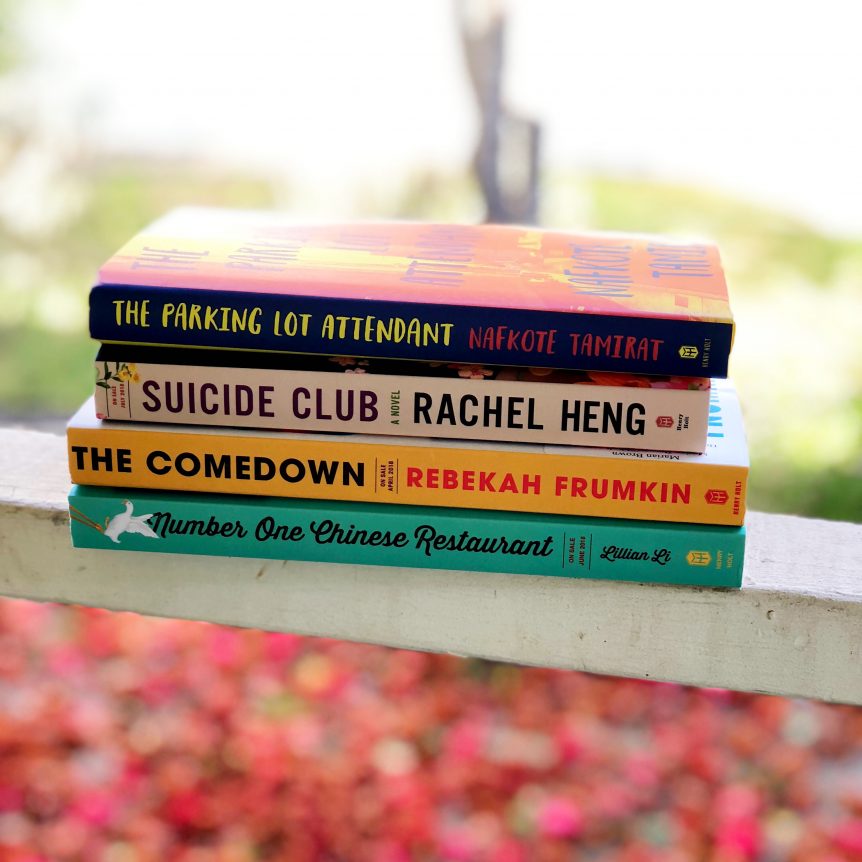 Thank you so much Henry Holt for sending me these gorgeous free copies! They are all so different and all sound amazing! I will leave the synopses below.

he Beijing Duck House in Rockville, Maryland, is not only a beloved go-to setting for hunger pangs and celebrations; it is its own world, inhabited by waiters and kitchen staff who have been fighting, loving, and aging within its walls for decades. When disaster strikes, this working family’s controlled chaos is set loose, forcing each character to confront the conflicts that fast-paced restaurant life has kept at bay.

Owner Jimmy Han hopes to leave his late father’s homespun establishment for a fancier one. Jimmy’s older brother, Johnny, and Johnny’s daughter, Annie, ache to return to a time before a father’s absence and a teenager’s silence pushed them apart. Nan and Ah-Jack, longtime Duck House employees, are tempted to turn their thirty-year friendship into something else, even as Nan’s son, Pat, struggles to stay out of trouble. And when Pat and Annie, caught in a mix of youthful lust and boredom, find themselves in a dangerous game that implicates them in the Duck House tragedy, their families must decide how much they are willing to sacrifice to help their children.

Generous in spirit, unaffected in its intelligence, multi-voiced, poignant, and darkly funny, Number One Chinese Restaurant looks beyond red tablecloths and silkscreen murals to share an unforgettable story about youth and aging, parents and children, and all the ways that our families destroy us while also keeping us grounded and alive. (Publication June 19, 2018)

THE COMEDOWN by Rebekah Frumkin:

A blistering dark comedy, Rebekah Frumkin’s The Comedown is a romp across America, from the Kent State shootings to protest marches in Chicago to the Florida Everglades, that explores delineating lines of race, class, religion, and time.

Scrappy, street smart drug dealer Reggie Marshall has never liked the simpering addict Leland Bloom-Mittwoch, which doesn’t stop Leland from looking up to Reggie with puppy-esque devotion. But when a drug deal goes dramatically, tragically wrong and a suitcase (which may or may not contain a quarter of a million dollars) disappears, the two men and their families become hopelessly entangled. It’s a mistake that sets in motion a series of events that are odd, captivating, suspenseful, and ultimately inevitable.

Both incendiary and earnest, The Comedown steadfastly catalogs the tangled messes the characters make of their lives, never losing sight of the beauty and power of each family member’s capacity for love, be it for money, drugs, or each other. (Publication April 17, 2018)

Lea Kirino is a “Lifer,” which means that a roll of the genetic dice has given her the potential to live forever―if she does everything right. And Lea is an overachiever. She’s a successful trader on the New York exchange―where instead of stocks, human organs are now bought and sold―she has a beautiful apartment, and a fiancé who rivals her in genetic perfection. And with the right balance of HealthTech™, rigorous juicing, and low-impact exercise, she might never die.

But Lea’s perfect life is turned upside down when she spots her estranged father on a crowded sidewalk. His return marks the beginning of her downfall as she is drawn into his mysterious world of the Suicide Club, a network of powerful individuals and rebels who reject society’s pursuit of immortality, and instead choose to live―and die―on their own terms. In this future world, death is not only taboo; it’s also highly illegal. Soon Lea is forced to choose between a sanitized immortal existence and a short, bittersweet time with a man she has never really known, but who is the only family she has left in the world. (Publication July 10, 2018)

A haunting story of fatherhood, national identity, and what it means to be an immigrant in America today, Nafkote Tamirat’s The Parking Lot Attendant explores how who we love, the choices we make, and the places we’re from combine to make us who we are.

The story begins on an undisclosed island where the unnamed narrator and her father are the two newest and least liked members of a commune that has taken up residence there. Though the commune was built on utopian principles, it quickly becomes clear that life here is not as harmonious as the founders intended. After immersing us in life on the island, our young heroine takes us back to Boston to recount the events that brought her here. Though she and her father belong to a wide Ethiopian network in the city, they mostly keep to themselves, which is how her father prefers it.

This detached existence only makes Ayale’s arrival on the scene more intoxicating. The unofficial king of Boston’s Ethiopian community, Ayale is a born hustler―when he turns his attention to the narrator, she feels seen for the first time. Ostensibly a parking lot attendant, Ayale soon proves to have other projects in the works, which the narrator becomes more and more entangled in to her father’s growing dismay. By the time the scope of Ayale’s schemes―and their repercussions―become apparent, our narrator has unwittingly become complicit in something much bigger and darker than she ever imagined. (Available now!)