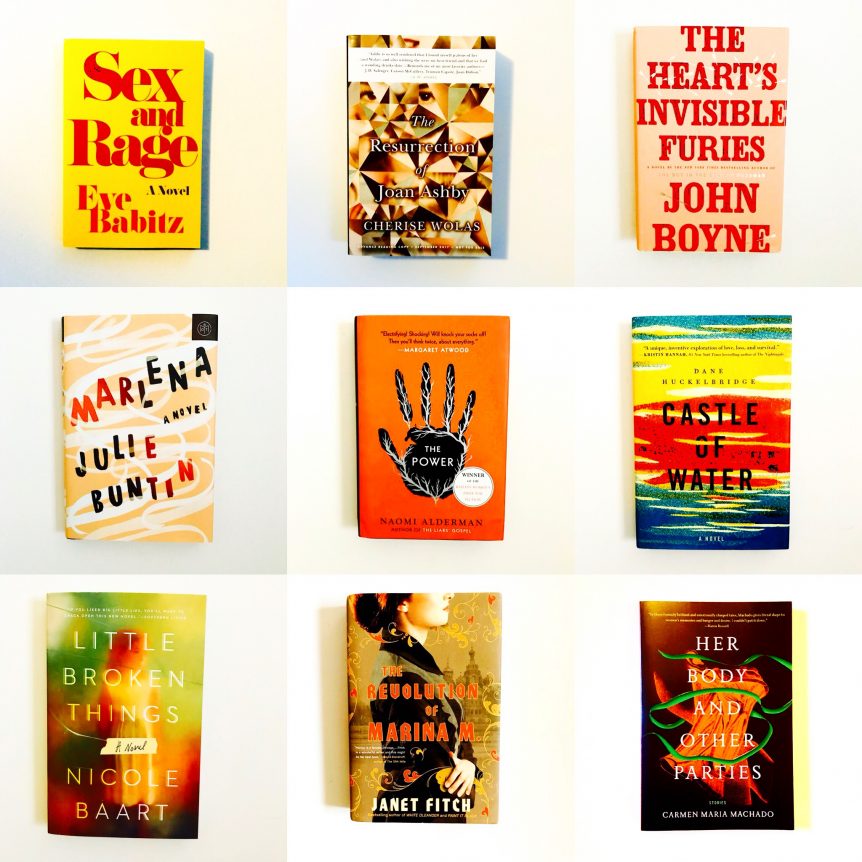 I was lucky enough to read some INCREDIBLE books this year! All of these books resonated with me in a big way! I look forward to all of the AMAZING books I get to read in 2018!

Did you read a book that you could not stop thinking about? Spot any favorites pictured here? I’ll list the book descriptions below!

THE POWER by Naomi Alderman

In THE POWER, the world is a recognizable place: there’s a rich Nigerian boy who lounges around the family pool; a foster kid whose religious parents hide their true nature; an ambitious American politician; a tough London girl from a tricky family. But then a vital new force takes root and flourishes, causing their lives to converge with devastating effect. Teenage girls now have immense physical power–they can cause agonizing pain and even death. And, with this small twist of nature, the world drastically resets.

SEX AND RAGE by Eve Babitz

Cyril Avery is not a real Avery — or at least, that’s what his adoptive parents tell him. And he never will be. But if he isn’t a real Avery, then who is he? Born out of wedlock to a teenage girl cast out from her rural Irish community and adopted by a well-to-do if eccentric Dublin couple via the intervention of a hunchbacked Redemptorist nun, Cyril is adrift in the world, anchored only tenuously by his heartfelt friendship with the infinitely more glamourous and dangerous Julian Woodbead. At the mercy of fortune and coincidence, he will spend a lifetime coming to know himself and where he came from – and over his many years, will struggle to discover an identity, a home, a country, and much more.

CASTLE OF WATER by Dane Huckelbridge

For Sophie Ducel, her honeymoon in French Polynesia was intended as a celebration of life. The proud owner of a thriving Parisian architecture firm, co-founded with her brilliant new husband, Sophie had much to look forward to―including a visit to the island home of her favorite singer, Jacques Brel. For Barry Bleecker, the same trip was meant to mark a new beginning. Turning away from his dreary existence in Manhattan finance, Barry had set his sights on fine art, seeking creative inspiration on the other side of the world―just like his idol, Paul Gauguin. But when their small plane is downed in the middle of the South Pacific, the sole survivors of the wreck are left with one common goal: to survive. Stranded hundreds of miles from civilization, on an island the size of a large city block, the two castaways must reconcile their differences and learn to draw on one another’s strengths if they are to have any hope of making it home.

The story of two girls and the wild year that will cost one her life, and define the other’s for decades. Everything about fifteen-year-old Cat’s new town in rural Michigan is lonely and off-kilter until she meets her neighbor, the manic, beautiful, pill-popping Marlena. Cat is quickly drawn into Marlena’s orbit and as she catalogues a litany of firsts―first drink, first cigarette, first kiss, first pill―Marlena’s habits harden and calcify. Within the year, Marlena is dead, drowned in six inches of icy water in the woods nearby. Now, decades later, when a ghost from that pivotal year surfaces unexpectedly, Cat must try again to move on, even as the memory of Marlena calls her back.

HER BODY AND OTHER PARTIES by Carmen Maria Machado

Machado blithely demolishes the arbitrary borders between psychological realism and science fiction, comedy and horror, fantasy and fabulism. While her work has earned her comparisons to Karen Russell and Kelly Link, she has a voice that is all her own. In this electric and provocative debut, Machado bends genre to shape startling narratives that map the realities of women’s lives and the violence visited upon their bodies. A wife refuses her husband’s entreaties to remove the green ribbon from around her neck. A woman recounts her sexual encounters as a plague slowly consumes humanity. A salesclerk in a mall makes a horrifying discovery within the seams of the store’s prom dresses. One woman’s surgery-induced weight loss results in an unwanted houseguest. And in the bravura novella “Especially Heinous,” Machado reimagines every episode of Law & Order: Special Victims Unit, a show we naïvely assumed had shown it all, generating a phantasmagoric police procedural full of doppelgängers, ghosts, and girls with bells for eyes. Earthy and otherworldly, antic and sexy, queer and caustic, comic and deadly serious, Her Body and Other Parties swings from horrific violence to the most exquisite sentiment. In their explosive originality, these stories enlarge the possibilities of contemporary fiction.

THE RESURRECTION OF JOAN ASHBY by Cherise Wolas

“I viewed the consumptive nature of love as a threat to serious women. But the wonderful man I just married believes as I do―work is paramount, absolutely no children―and now love seems to me quite marvelous.”

These words are spoken to a rapturous audience by Joan Ashby, a brilliant and intense literary sensation acclaimed for her explosively dark and singular stories. When Joan finds herself unexpectedly pregnant, she is stunned by Martin’s delight, his instant betrayal of their pact. She makes a fateful, selfless decision then, to embrace her unintentional family. Challenged by raising two precocious sons, it is decades before she finally completes her masterpiece novel. Poised to reclaim the spotlight, to resume the intended life she gave up for love, a betrayal of Shakespearean proportion forces her to question every choice she has made.

I have something for you. When Quinn Cruz receives that cryptic text message from her older sister Nora, she doesn’t think much of it. They haven’t seen each other in nearly a year and thanks to Nora’s fierce aloofness, their relationship consists mostly of infrequent phone calls and an occasional email or text. But when a haunted Nora shows up at the lake near Quinn’s house just hours later, a chain reaction is set into motion that will change both of their lives forever. Nora’s “something” is more shocking than Quinn could have ever imagined: a little girl, cowering, wide-eyed, and tight-lipped. Nora hands her over to Quinn with instructions to keep her safe, and not to utter a word about the child to anyone, especially not their buttoned-up mother who seems determined to pretend everything is perfect. But before Quinn can ask even one of the million questions swirling around her head, Nora disappears, and Quinn finds herself the unlikely caretaker of a girl introduced simply as Lucy. While Quinn struggles to honor her sister’s desperate request and care for the lost, scared Lucy, she fears that Nora may have gotten involved in something way over her head—something that will threaten them all. But Quinn’s worries are nothing compared to the firestorm that Nora is facing. It’s a matter of life and death, of family and freedom, and ultimately, about the lengths a woman will go to protect the ones she loves.

THE REVOLUTION OF MARINA M. by Janet Fitch

St. Petersburg, New Year’s Eve, 1916. Marina Makarova is a young woman of privilege who aches to break free of the constraints of her genteel life, a life about to be violently upended by the vast forces of history. Swept up on these tides, Marina will join the marches for workers’ rights, fall in love with a radical young poet, and betray everything she holds dear, before being betrayed in turn. As her country goes through almost unimaginable upheaval, Marina’s own coming-of-age unfolds, marked by deep passion and devastating loss, and the private heroism of an ordinary woman living through extraordinary times. This is the epic, mesmerizing story of one indomitable woman’s journey through some of the most dramatic events of the last century.