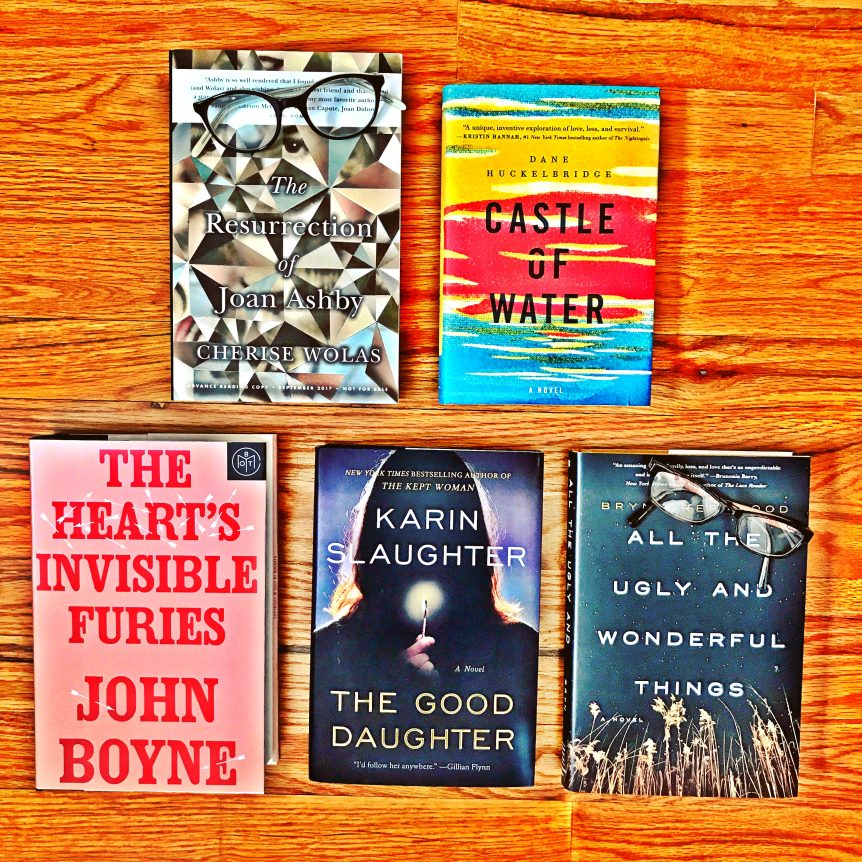 1. The Resurrection of Joan Ashby by Cherise Wolas

These words are spoken to a rapturous audience by Joan Ashby, a brilliant and intense literary sensation acclaimed for her explosively dark and singular stories. When Joan finds herself unexpectedly pregnant, she is stunned by Martin’s delight, his instant betrayal of their pact. She makes a fateful, selfless decision then, to embrace her unintentional family. Challenged by raising two precocious sons, it is decades before she finally completes her masterpiece novel. Poised to reclaim the spotlight, to resume the intended life she gave up for love, a betrayal of Shakespearean proportion forces her to question every choice she has made.

This is a story about sacrifice and motherhood, the burdens of expectation and genius. Joan Ashby is an indelible heroine candid about her struggles and unapologetic in her ambition.

2. Castle of Water by Dane Huckelbridge

For Sophie Ducel, her honeymoon in French Polynesia was intended as a celebration of life. The proud owner of a thriving Parisian architecture firm, co-founded with her brilliant new husband, Sophie had much to look forward to―including a visit to the island home of her favorite singer, Jacques Brel.

For Barry Bleecker, the same trip was meant to mark a new beginning. Turning away from his dreary existence in Manhattan finance, Barry had set his sights on fine art, seeking creative inspiration on the other side of the world―just like his idol, Paul Gauguin.

But when their small plane is downed in the middle of the South Pacific, the sole survivors of the wreck are left with one common goal: to survive. Stranded hundreds of miles from civilization, on an island the size of a large city block, the two castaways must reconcile their differences and learn to draw on one another’s strengths if they are to have any hope of making it home.

Cyril Avery is not a real Avery or at least that’s what his adoptive parents tell him. And he never will be. But if he isn’t a real Avery, then who is he? Born out of wedlock to a teenage girl cast out from her rural Irish community and adopted by a well-to-do if eccentric Dublin couple via the intervention of a hunchbacked Redemptorist nun, Cyril is adrift in the world, anchored only tenuously by his heartfelt friendship with the infinitely more glamourous and dangerous Julian Woodbead. At the mercy of fortune and coincidence, he will spend a lifetime coming to know himself and where he came from – and over his three score years and ten, will struggle to discover an identity, a home, a country and much more.

4. The Good Daughter by Karin Slaughter

Two girls are forced into the woods at gunpoint. One runs for her life. One is left behind…

Twenty-eight years ago, Charlotte and Samantha Quinn’s happy small-town family life was torn apart by a terrifying attack on their family home. It left their mother dead. It left their father — Pikeville’s notorious defense attorney — devastated. And it left the family fractured beyond repair, consumed by secrets from that terrible night.

Twenty-eight years later, and Charlie has followed in her father’s footsteps to become a lawyer herself — the ideal good daughter. But when violence comes to Pikeville again — and a shocking tragedy leaves the whole town traumatized — Charlie is plunged into a nightmare. Not only is she the first witness on the scene, but it’s a case that unleashes the terrible memories she’s spent so long trying to suppress. Because the shocking truth about the crime that destroyed her family nearly thirty years ago won’t stay buried forever…

5. All The Ugly and Wonderful Things by Bryn Greenwood

A beautiful and provocative love story between two unlikely people and the hard-won relationship that elevates them above the Midwestern meth lab backdrop of their lives.

As the daughter of a drug dealer, Wavy knows not to trust people, not even her own parents. It’s safer to keep her mouth shut and stay out of sight. Struggling to raise her little brother, Donal, eight-year-old Wavy is the only responsible adult around. Obsessed with the constellations, she finds peace in the starry night sky above the fields behind her house, until one night her star gazing causes an accident. After witnessing his motorcycle wreck, she forms an unusual friendship with one of her father’s thugs, Kellen, a tattooed ex-con with a heart of gold.

By the time Wavy is a teenager, her relationship with Kellen is the only tender thing in a brutal world of addicts and debauchery. When tragedy rips Wavy’s family apart, a well-meaning aunt steps in, and what is beautiful to Wavy looks ugly under the scrutiny of the outside world.