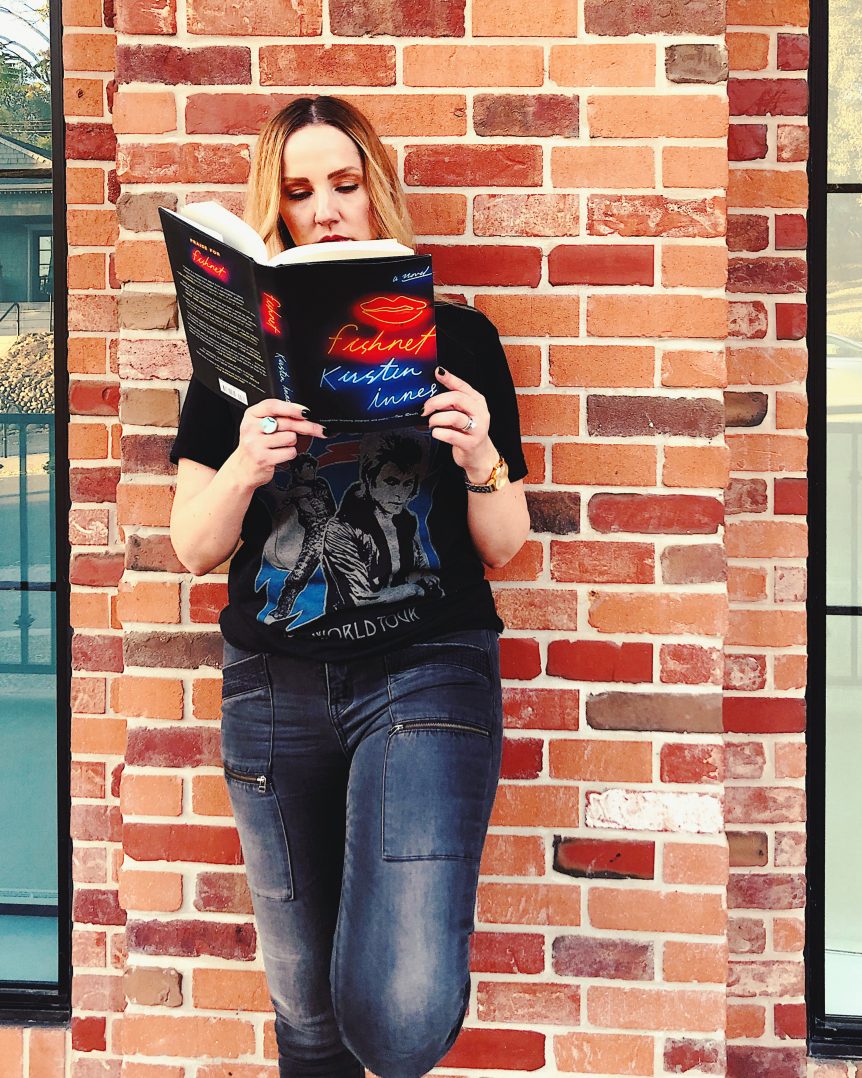 Thank you so much Gallery Books for providing my copy.

Rona Leonard was only twenty-years-old when she walked out of her sister Fiona’s flat and disappeared.

Six years later—worn down by a tedious job, childcare, and an aching absence in her life—Fiona’s mundane existence is blown apart by the revelation that Rona had been working as a prostitute before she vanished. Driven to discover the truth, Fiona embarks on an obsessive quest to investigate the sex industry that claimed her sister. However, as she is drawn into this complex world, Fiona finds herself seduced by the power it offers women in a society determined to see them only as victims.

When I saw the cover of FISHNET by Kristin Innes I knew I needed to read it. I love shiny objects and that includes a gorgeous cover with a bold neon sign on it. Then once I started reading, I couldn’t stop.

Set in Scotland, our main character, Fiona Leonard, is bored at her menial administrative job and looking for something to get herself motivated. There are picketers outside her office protesting the demolition of a shelter for sex workers. Because of this, Fiona becomes obsessed with the lives of sex workers and cannot stop searching online. Additionally, her sister, Rona, disappeared 6 years ago leaving her daughter behind. Her parents have stopped looking, but Fiona can’t let it go. She decides to enter the world of sex workers as she suspects her sister may have ended up as one. At first, it feels glamorous: she’s envious of these women and their strength, sense of community, and sexual freedom. But after befriending and spending time with them, she realizes it’s actual work. Fiona’s eyes open up to a world that’s very different from her own and like nothing she has ever encountered. She grows up a bit and learns what it means to survive and be a feminist.

So here’s the thing: the writing style and format of the book is like nothing I’ve seen before, so it’s difficult to follow. I personally love a challenging book, and I knew it was going to be one going in. The story is told from different perspectives, changing from second to third person and jumping through timelines, which takes some getting used to. Also, I thought it was a nice touch that Innes writes in the Scottish dialect and I always appreciate small detail ms such as that. I couldn’t put this book down – the atmospheric, authentic, and evocative language and eye-opening story engrossed me. And like Fiona, I learned a great deal.

The primary focus of this book is about Fiona’s realization of what it is to be a true feminist and not to judge a book by its cover (pun intended). She learns from people and their experiences – and learns not to be judgmental. Highly recommend to readers looking for a unique and challenging read.