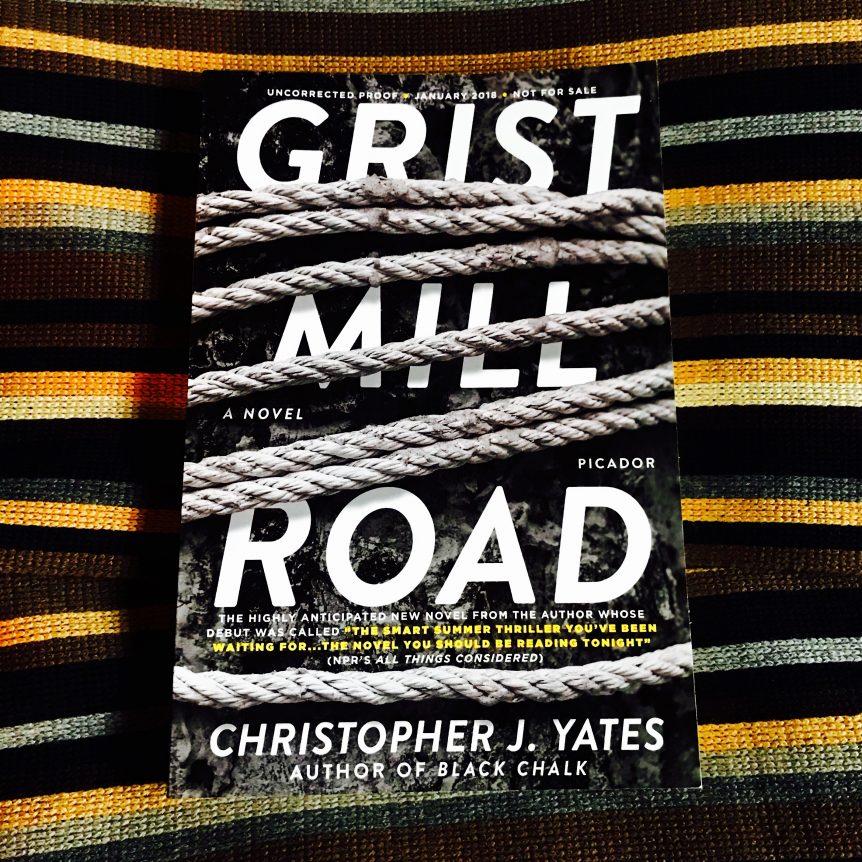 Thank you so much to Picador for providing my free advance copy – all opinions are my own.

Grist Mill Road is a dark, twisted, and expertly plotted Rashomon-style tale. The year is 1982; the setting, an Edenic hamlet some ninety miles north of New York City. There, among the craggy rock cliffs and glacial ponds of timeworn mountains, three friends―Patrick, Matthew, and Hannah―are bound together by a terrible and seemingly senseless crime. Twenty-six years later, in New York City, living lives their younger selves never could have predicted, the three meet again―with even more devastating results.

“It took me awhile to retune myself, but then, piece by piece, I started to hear the world. Lake water sloshing, the drift of the breeze—a sound similar to my breath—a woodpecker hammering somewhere far off.”

The Rashomon film style is known for a plot device that involves various characters providing subjective, alternative, self-serving and contradictory versions of the same incident.

In this novel, the story is divided into three parts. The main characters, Patch, Hannah, and Matthew, all share their own accounts of a horrific crime that took place in 1982 and how they cope with it after the fact. Part one is shown from Patrick’s (aka Patch’s) point of view beginning at age twelve. Part two is presented from Hannah’s perspective at nearly thirteen. And finally, the last part details Matthew’s viewpoint starting at age fourteen. Each individual part is divided into chapters that alternate between events that occur in 1982 and in 2008.

To me, this story read more like literary fiction that has a terrible crime as its primary plot device instead of a pure mystery, but there was just enough mystery to keep my interest. Grist Mill Road is not a fast-paced thriller nor a whodunit —it is a slow-paced novel with a multilayered plot. And the story told has a darkness to it with a unique writing style that utilizes three very distinct voices.

Yates ultimately surprised me, as what I thought was true in the beginning was proven false in the end. My only issue with the novel is that at times there was too much detail, especially in the middle. I found it slow through this area, but it did not hinder the grave impact it had on me. I thought it was clever how through all of the details there was a clear message about truth, empathy, and forgiveness. I have to admit this novel made me quite sad at the end and my heart broke for one of these characters but I won’t name who. Overall, this is a very interesting and complex story that I will be thinking about for years to come.