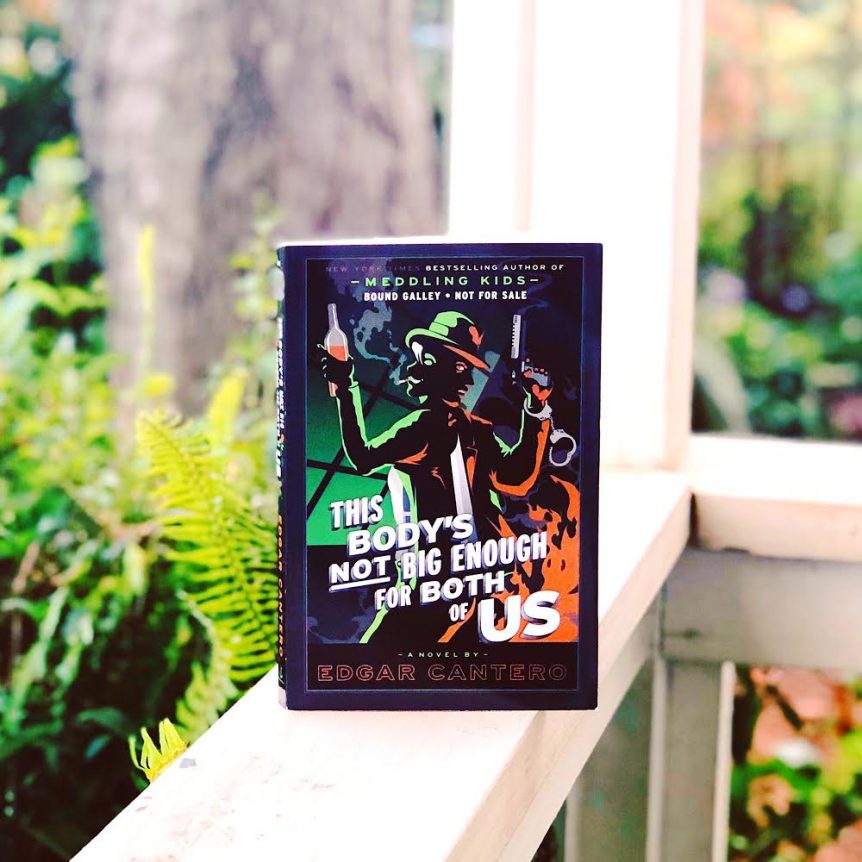 Thank you so much to Doubleday Books for providing my free copy – all opinions are my own.

In a dingy office in Fisherman’s Wharf, the glass panel in the door bears the names of A. Kimrean and Z. Kimrean. Private Eyes. Behind the door there is only one desk, one chair, one scrawny androgynous P.I. in a tank top and skimpy waistcoat. A.Z., as they are collectively known, are twin brother and sister. He’s pure misanthropic logic, she’s wild hedonistic creativity. The Kimreans have been locked in mortal battle since they were in utero…which is tricky because they, very literally, share one single body. That’s right. One body, two pilots. The mystery and absurdity of how Kimrean functions, and how they subvert every plotline, twist, explosion, and gunshot–and confuse every cop, neckless thug, cartel boss, ninja, and femme fatale–in the book is pure Cantero magic. Someone is murdering the sons of the ruthless drug cartel boss known as the Lyon in the biggest baddest town in California–San Carnal. The notorious A.Z. Kimrean must go to the sin-soaked, palm-tree-lined streets of San Carnal, infiltrate the Lyon’s inner circle, and find out who is targeting his heirs, and while they are at it, rescue an undercover cop in too deep, deal with a plucky young stowaway, and stop a major gang war from engulfing California. They’ll face every plot device and break every rule Elmore Leonard wrote before they can crack the case, if they don’t kill each other (themselves) first.

This book is so crazy original, creative, and hilarious. Adrian and Zooey Kimrean aka A.Z. are not your typical PI team as they are not just brother and sister twins, they also share everything, including a single body. In San Carnel, California, a gang war is on the verge of igniting when a drug cartel’s son is murdered, so the undercover SFPD officer working the case, Danny Mojave, looks to A.Z. as the best person for the job. They might share the same body, but they control different hemispheres of the brain. Adrian controls the left side: he is genius level smart, analytical, and ultra-logical. Zooey controls the right: she is impulsive, creative, and extremely passionate. These two are in a round the clock struggle with each other, and Danny has to rely on them to prevent this imminent threat to San Carnel.

This story totally caught me off guard as I had no idea what to expect. Cantero is an inventive and clever writer, but it can take some getting used to. The entire book is laugh out loud funny, but it also has depth and a well thought out investigative case. I loved reading the different personalities of A.Z. as they are so extremely dissimilar; logical Adrian with his Sherlockian ways and Zooey with her ability to talk to anybody is just so brilliant. There is so much imagination behind this story yet it’s very methodical. And all the pop culture references really put the cherry on the cake! THIS BODY’S NOT BIG ENOUGH FOR BOTH OF US is perfectly paced, inundated with dark wit, and laced with unique style.