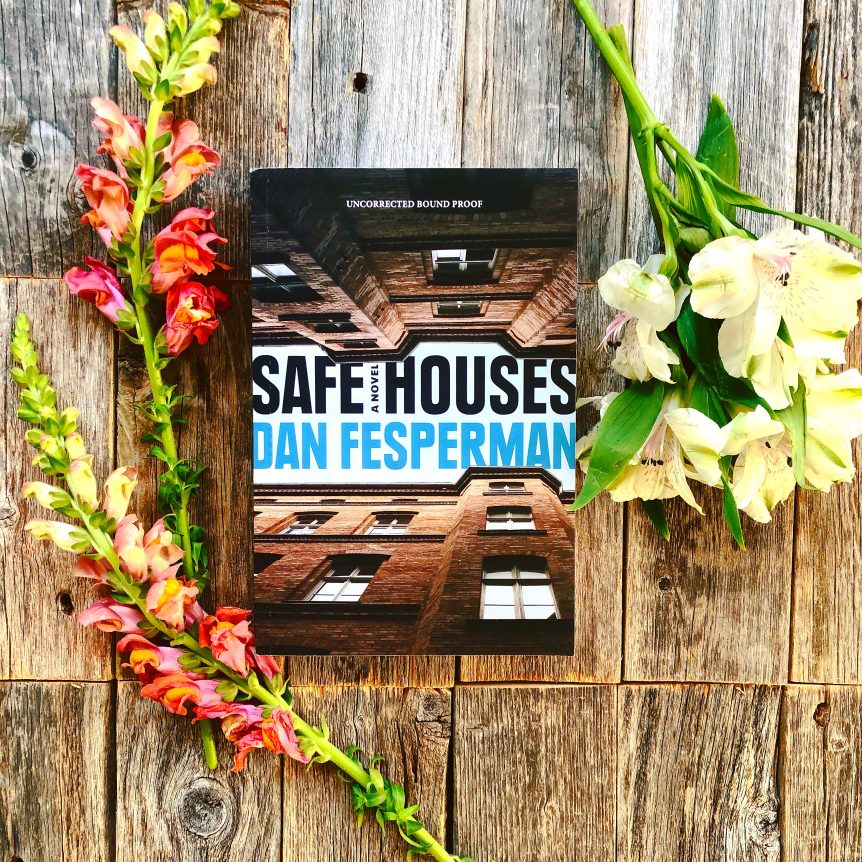 Many thanks again to Knopf and Abby for the free copy! There is a giveaway running on my Instagram page for one finished copy – hurry over there to check it out!

West Berlin, 1979. Helen Abell oversees the CIA’s network of safe houses, rare havens for field agents and case officers amidst the dangerous milieu of a city in the grips of the Cold War. Helen’s world is upended when, during her routine inspection of an agency property, she overhears a meeting between two people unfamiliar to her speaking a coded language that hints at shadowy realities far beyond her comprehension. Before the day is out, she witnesses a second unauthorized encounter, one that will place her in the sight lines of the most ruthless and powerful man at the agency. Her attempts to expose the dark truths about what she has witnessed will bring about repercussions that reach across decades and continents into the present day, when, in a farm town in Maryland, a young man is arrested for the double murder of his parents, and his sister takes it upon herself to find out why he did it.

On the night Willard Shoat killed his parents, he walked barefoot to the edge of town with a can of red spray paint, out to the sign that said, “Entering POSTON, pop. 924.” He shook the clicking can, raised on his tiptoes, and opened fire. First he slashed out the number. Then he painted a new total to account for the subtraction of Mom and Dad: 921. Willard never was much for math.

But it took the police a while to figure that out, and for two days running they dug holes all over the family farm in search of a third body. They ran backhoes and unleashed sniffer dogs, going after anything that hinted at rot or decay. Being a farm, there was plenty of both. The manure heaps alone kept them busy for an entire afternoon, and they tore up the better part of an acre before concluding, as almost everyone else in town already had, that Willard had simply gotten his sums wrong.

Henry Mattick, new to Poston and living in a small frame house less than a block from the scene, took a contrary view. Dumb as the boy was—an unkind word, perhaps, for a twenty-four-year-old whose mind never made it past kindergarten— Henry believed Willard was simply counting himself out of the game as well. For what better way to negate yourself than to do away with the two people who brought you into the world?

Henry got wrapped up in the story almost from the moment he first heard the sirens. It wasn’t as if he had much else to do, marooned in a rural village on the Maryland Eastern Shore. He was between jobs and romantically unattached, quartered in a spartan rancher owned by a distant relative who’d offered temporary refuge at a bargain rate. Or so Henry told the neighbors on the few occasions they induced him to talk. They knew he was from Baltimore by the stickers on his car, but when they asked about that he only nodded.

His only companion was a brindled, underfed mutt left behind by the previous tenant, a dog so accustomed to neglect that he would disappear for days at a time, showing up only to eat, accept a scratch or two on the head, and poop in the grass by the porch before again wandering off. Henry, deciding not to take it personally, gave the dog a name— Scooter— and accommodated his unpredictable schedule by keeping his bowl filled at all hours. Watchful by nature, Henry kept an eye on the house down the street as the police came and went. He followed the saturation media coverage almost minute by minute, and when the cable networks began to lose interest he switched to the Internet.

By the lurid and violent standards of the age, the case struck Henry as fairly run-of-the-mill. And with only two fatalities it probably would have attracted little media attention if not for Willard’s strange sojourn to the sign at the edge of town. Otherwise, the basics were simple. The murder weapon was a hunting rifle, a .30- 06 bolt action Ruger American that Willard’s dad had bought him for his fourteenth birthday. Up to then he’d used it only for shooting at deer. He shot both his parents in the face—Dad first, Mom second. Investigators settled on that order of events partly by reading the spatter of blood and gore, but also because his mother’s body was found sitting upright in bed, meaning she had probably awakened after the first shot.

Neither the boy nor his parents had been drinking in the hours beforehand. Toxicology tests weren’t yet complete, but none of the three had a history of drug use, and Willard had been reasonably lucid, all things considered, at the time of his arrest. Both deaths were almost certainly instantaneous. Estimated time: Between 4 and 4:30 a.m. Based on the blood trail, Willard had dropped the gun on the bedroom floor and proceeded immediately out of the house, pausing only to pick up a spray can of tractor paint, which he’d apparently set by the front door before the shooting.

As for motive, the family’s oft-interviewed friends and neighbors offered no plausible theories, despite the best efforts of the reporters who saturated the town. (Henry himself turned away six of them, and for three days they went door- to- door with the fervor of Jehovah’s Witnesses.) The townspeople’s accounts were almost identical in tone and content. In the weeks leading up to the event, Willard had exhibited no apparent anger, no violent tendencies, no signs of mental illness. He was just “slow,” everyone said. Slow and sweet and impressionable, with a special fondness for fried chicken, cotton candy, fireworks, and marching bands. And although he went hunting with his father every deer season, no one could remember the last time he’d bagged one—or, indeed, if he’d ever even hit one.

A few people raised a history of bullying as a possible instigator, although everyone said the problem had mostly disappeared years ago, when his contemporaries went off to jobs or to college. And by then Willard had grown large enough to make picking a fight with him seem like a bad idea.

There was no suggestion of parental abuse. His father, Tarrant, sixty- three, was known as a hard worker and devoted parent, and was well thought of in the community. His mother, Helen, fifty-nine, although a bit chilly and aloof, had always been fiercely protective of his interests. No one had ever heard her raise her voice to him. In fact, people said, as if suddenly awakening to the realization, for years no one seemed to have heard her say much of anything to anybody.

In a way, she had become as much of a closed book as her son. Those who thought about it the longest dated her withdrawal to the year the Shoats’ daughter, Anna, went off to college— six or seven years ago, they guessed, before inevitably realizing on second thought that it had been more like a dozen, a calculation that left everyone shaking their heads at the fleeting nature of time. Anna, who now lived in Baltimore, wasn’t quoted anywhere. Apparently she’d gone into seclusion, and wasn’t expected in town until the day of the funeral.

Deprived of any obvious answers, some of the more pious citizens of Poston finally concluded that the Shoats’ failure to find a church home must have contributed to their downfall. A boy of unshakable faith, they said, never would have done such a thing. That body of opinion, quoted most prominently on Fox, provided Henry with a welcome moment of comic relief. Typical, he mused, and yet another reason he wouldn’t be sticking around Poston any longer than he had to.

Yet, he, too, believed there had to be more to the story, if only because his most recent employments had taught him that, even for the simple- minded, motive is often buried deep within a welter of complexity. And as he searched for answers from his amateur’s perch, the one aspect of the murders that he kept returning to was the same one that had captured the public’s imagination: Willard’s half-mile walk to the edge of town. Henry was so haunted by the image of the boy’s lonely, purposeful stroll that he decided late one night—or, rather, very early one morning— to retrace Willard’s steps, if only to share in the sensory cues that the young man must have worn like a second garment as he strolled out to correct the town’s population total, as single-minded as a census taker.