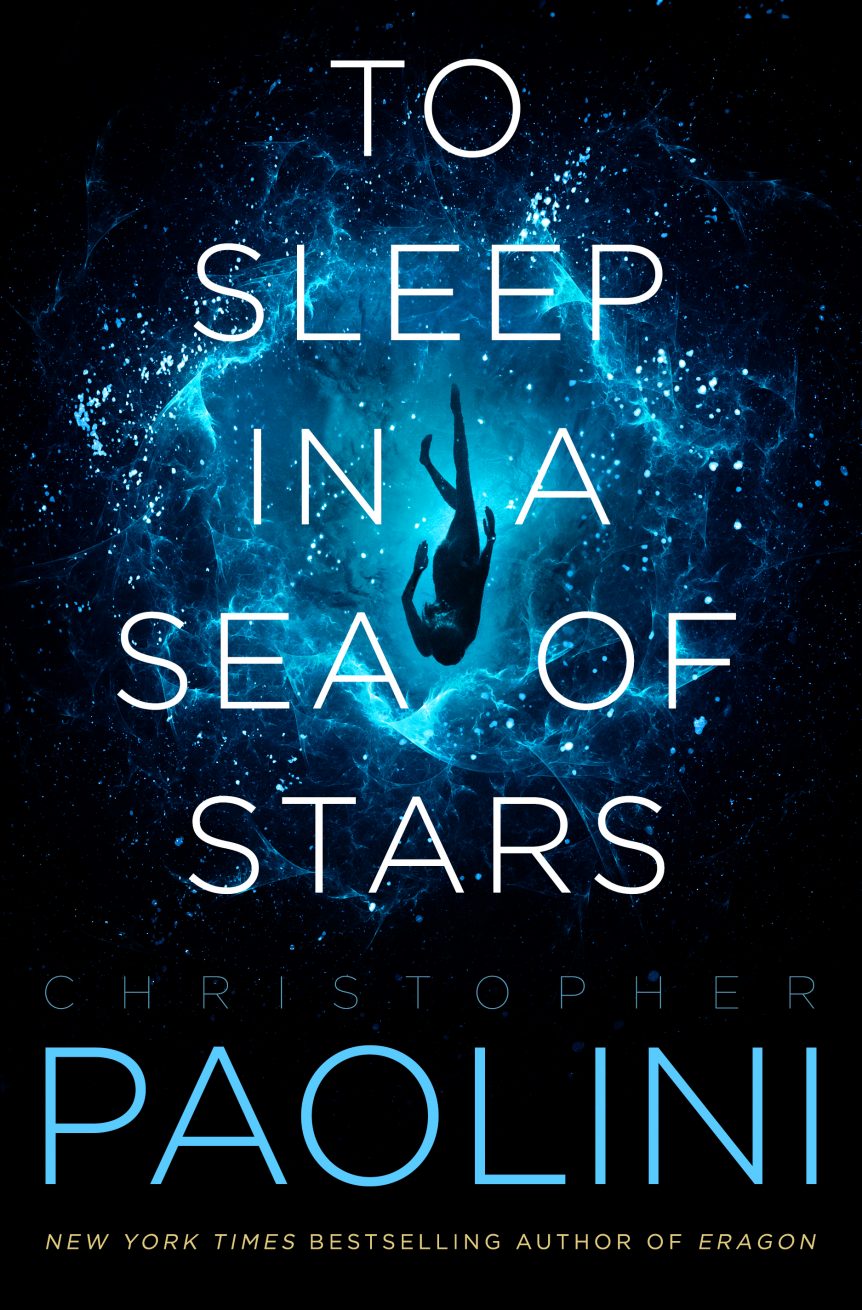 Hello readers! I am so excited to share an excerpt of Christopher Paolini’s TO SLEEP IN A SEA OF STARS. The book does not come out until September 15th from Tor Books but here is a sneak peek!

Kira Navárez dreamed of finding life on new worlds.
Now she has awakened a nightmare.

While exploring a distant planet, she discovers an alien relic that thrusts her into an epic journey of transformation and discovery.

Her odyssey will carry her to the far reaches of the galaxy. Earth and her colonies are on the brink of annihilation.

The will to survive.
​
​The hope of humanity.

This epic novel follows Kira Navárez, who, during a routine survey mission on an uncolonized planet, finds an alien relic that thrusts her into the wonders and the nightmares of first contact. Epic space battles for the fate of humanity take her to the farthest reaches of the galaxy and, in the process, transform not only her ― but the entire course of history.

Together, she and Alan scrambled into their clothes. Kira spared a second of thought for her strange dream—everything felt strange at the moment—and then they hurried out of the cabin and rushed over toward Neghar’s quarters.

As they approached, Kira heard hacking: a deep, wet, ripping sound that made her imagine raw flesh going through a shredder. She shuddered.

Neghar was standing in the middle of the hallway with the others gathered around her, doubled over, hands on her knees, coughing so hard Kira could hear her vocal cords fraying. Fizel was next to her, hand on her back.

“We’ll get you to sickbay. Jenan! Alan! Grab her arms, help carry her. Quickly now, qu—”

Neghar heaved, and Kira heard a loud, distinct snap from inside the woman’s narrow chest.

Black blood sprayed from Neghar’s mouth, painting the deck in a wide fan.

Marie-Élise shrieked, and several people retched. The fear from Kira’s dream returned, intensified. This was bad. This was dangerous.

“We have to go,” she said, and tugged on Alan’s sleeve. But he wasn’t listening.

“Everyone back! Someone get the Extenuating Circumstances on the horn. Now!”

More blood sprayed from Neghar’s mouth, and she dropped to one knee. The whites of her eyes were freakishly wide. Her face was crimson, and her throat worked as if she were choking.

“Alan,” said Kira. Too late; he was moving to help Fizel.

She took a step back. Then another. No one noticed; they were all looking at Neghar, trying to figure out what to do while staying out of the way of the blood flying from her mouth.

Kira felt like screaming at them to leave, to run, to escape.

She shook her head and pressed her fists against her mouth, scared blood was going to erupt out of her as well. Her head felt as if it were about to burst, and her skin was crawling with horror: a thousand ants skittering over every centimeter. Her whole body itched with revulsion.

Jenan and Alan tried to lift Neghar back to her feet. She shook her head and gagged. Once. Twice. And then she spat a clot of something onto the deck. It was too dark to be blood. Too liquid to be metal.

Kira dug her fingers into her arm, scrubbing at it as a scream of revulsion threatened to erupt out of her.

Neghar collapsed backwards. Then the clot moved. It twitched like a clump of muscle hit with an electrical current.

People shouted and jumped away. Alan retreated toward Kira, never taking his eyes off the unformed lump.

Kira dry-heaved. She took another step back. Her arm was burning: thin lines of fire squirming across her skin.

Her nails had carved furrows in her flesh, crimson gashes that ended with crumpled strips of skin. And within the furrows, she saw another something twitch.

She arched her back and thrashed, clawing at the floor, desperate to escape the onslaught of agony. She screamed again; she screamed so hard her voice broke and a slick of hot blood coated her throat.

She couldn’t breathe. The pain was too intense. Her skin was burning, and it felt as if her veins were filled with acid and her flesh was tearing itself from her limbs.

Dark shapes blocked the light overhead as people moved around her. Alan’s face appeared next to her. She thrashed again, and she was on her stomach, her cheek pressed flat against the hard surface.

Her body relaxed for a second, and she took a single, gasping breath before going rigid and loosing a silent howl. The muscles of her face cramped with the force of her rictus, and tears leaked from the corners of her eyes.

Hands turned her over. They gripped her arms and legs, holding them in place. It did nothing to stop the pain.

She forced her eyes open and, with blurry vision, saw Alan and, behind him, Fizel leaning toward her with a hypo. Farther back, Jenan, Yugo, and Seppo were pinning her legs to the floor, while Ivanova and Marie-Élise helped Neghar away from the clot on the deck.

She tried to reply, but all she succeeded in doing was uttering a strangled whimper.

Then Fizel pressed the hypo against her shoulder. Whatever he injected didn’t seem to have any effect. Her heels drummed against the floor, and she felt her head slam against the deck, again and again.

“Jesus, someone help her,” Alan cried.

“That thing on the floor is moving! Shi—”

The walls swam around her as they lifted her. Kira felt like she was being strangled. She tried to inhale, but her muscles were too cramped. Red sparks gathered around the edges of her vision as Alan and the others carried her down the hallway. She felt as if she were floating; everything seemed insubstantial except the pain and her fear.

A jolt as they dropped her onto Fizel’s exam table. Her abdomen relaxed for a second, just long enough for Kira to steal a breath before her muscles locked back up.

“Close the door! Keep that thing out!” A thunk as the sickbay pressure lock engaged.

As if in response, the pain tripled, something she wouldn’t have believed possible. A low groan escaped her, and she jerked, unable to control the motion. She could feel foam gathering in her mouth, clogging her throat. She gagged and convulsed.

Equipment clattered, and then fingers forced Kira’s jaw apart, and someone jammed a tube into her mouth, down her throat. She gagged again. A moment later, sweet, precious air poured into her lungs, sweeping aside the curtain darkening her vision.

Alan was hovering over her, his face contorted with worry.

Kira tried to talk. But the only sound she could make was an inarticulate groan.

“Just hold on. Fizel’s going to help you.” He looked as if he were about to cry.

Kira had never been so afraid. Something was wrong inside her, and it was getting worse.
Run, she thought. Run! Get away from here before—

Dark lines shot across her skin: black lightning bolts that twisted and squirmed as if alive. Then they froze in place, and where each one lay, her skin split and tore, like the carapace of a molting insect.

Kira’s fear overflowed, filling her with a feeling of utter and inescapable doom. If she could have screamed, her cry would have reached the stars. 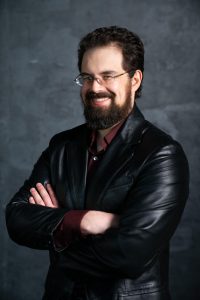 Christopher Paolini was born in Southern California and has lived most of his life in Paradise Valley, Montana. He published his first novel, Eragon, in 2003 at the age of 19, and quickly became a publishing phenomenon. His Inheritance Cycle—Eragon and its three sequels—have sold nearly 40 million copies worldwide. This is his first adult novel.