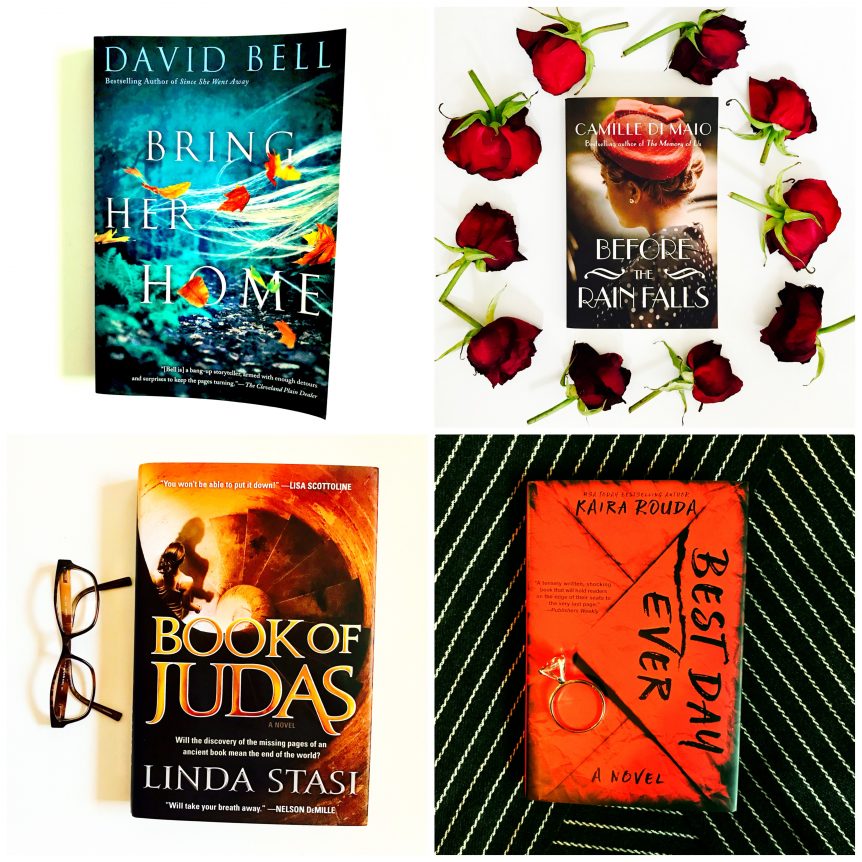 I got this AMAZING book mail from Get Red PR and I want to share it!!

BEST DAY EVER by Kaira Rouda –

“I glance at my wife as she climbs into the passenger seat, and I am bursting with confidence. Today will be everything I’ve promised her…and more…”

Paul Strom has the perfect life: a glittering career as an advertising executive, a beautiful wife, two healthy boys and a big house in a wealthy suburb. And he’s the perfect husband: breadwinner, protector, provider. That’s why he’s planned a romantic weekend for his wife, Mia, at their lake house, just the two of them. And he’s promised today will be the best day ever.

But as Paul and Mia drive out of the city and toward the countryside, a spike of tension begins to wedge itself between them and doubts start to arise. How much do they trust each other? And how perfect is their marriage, or any marriage, really?

BOOK OF JUDAS by Linda Stasi –

When her infant son is placed in mortal danger, New York City reporter Alessandra Russo is forced to save him by tracking down the missing pages of the Gospel of Judas, a heretical manuscript that was unearthed in Al-Minya, Egypt, in the 1970s. The manuscript declares that Judas was the beloved, not the betrayer, of Jesus.

The Gospel disappeared for decades before being rediscovered, rotted beyond repair, in a safety deposit box. Rumors insist that the most important pages had been stolen―pages that Alessandra now must find, if they even exist.

Do the lost pages contain a secret that will challenge Christianity’s core beliefs about the creation of life, or that might hold the power to unleash Armageddon? What if such explosive documents fell into the hands of modern-day terrorists, dictators, or religious fanatics?

Alessandra plunges into a dark world of murder, conspiracy, and sexual depravity…and most importantly, a race against the clock to save her own child.

In this exciting follow-up to The Sixth Station, award-winning journalist Linda Stasi brings her formidable investigative skills, big city street smarts, and fast-flying pen to a thriller that will leave readers breathless.

BEFORE THE RAIN FALLS by Camille Di Maio –

After serving seventy years in prison for the murder of her sister, Eula, Della Lee has finally returned home to the Texas town of Puerto Pesar. She’s free from confinement—and ready to tell her secrets before it’s too late.

She finds a willing audience in journalist Mick Anders, who is reeling after his suspension from a Boston newspaper and in town, reluctantly, to investigate a mysterious portrait of Eula that reportedly sheds tears. He crosses paths with Dr. Paloma Vega, who’s visiting Puerto Pesar with her own mission: to take care of her ailing grandmother and to rescue her rebellious younger sister before something terrible happens. Paloma and Mick have their reasons to be in the hot, parched border town whose name translates as “Port of Regret.” But they don’t anticipate how their lives will be changed forever.

Moving and engrossing, this dual story alternates between Della’s dark ordeals of the 1940s and Paloma and Mick’s present-day search for answers―about roots, family, love, and what is truly important in life.

BRING HER HOME by David Bell –

Just a year and a half after the tragic death of his wife, Bill Price’s fifteen-year-old daughter, Summer, and her best friend, Haley, disappear. Days later, the girls are found in a city park. Haley is dead at the scene, while Summer is left beaten beyond recognition and clinging to life.

As Bill holds vigil over Summer’s bandaged body, the only sound the unconscious girl can make is one cryptic and chilling word: No. And the more time Bill spends with Summer, the more he wonders what happened to her. Or if the injured girl in the hospital bed is really his daughter at all.

When troubling new questions about Summer’s life surface, Bill is not prepared for the aftershocks. He’ll soon discover that both the living and the dead have secrets. And that searching for the truth will tear open old wounds that pierce straight to the heart of his family..

I read Bring Her Home, loved it, and will post a review next week!