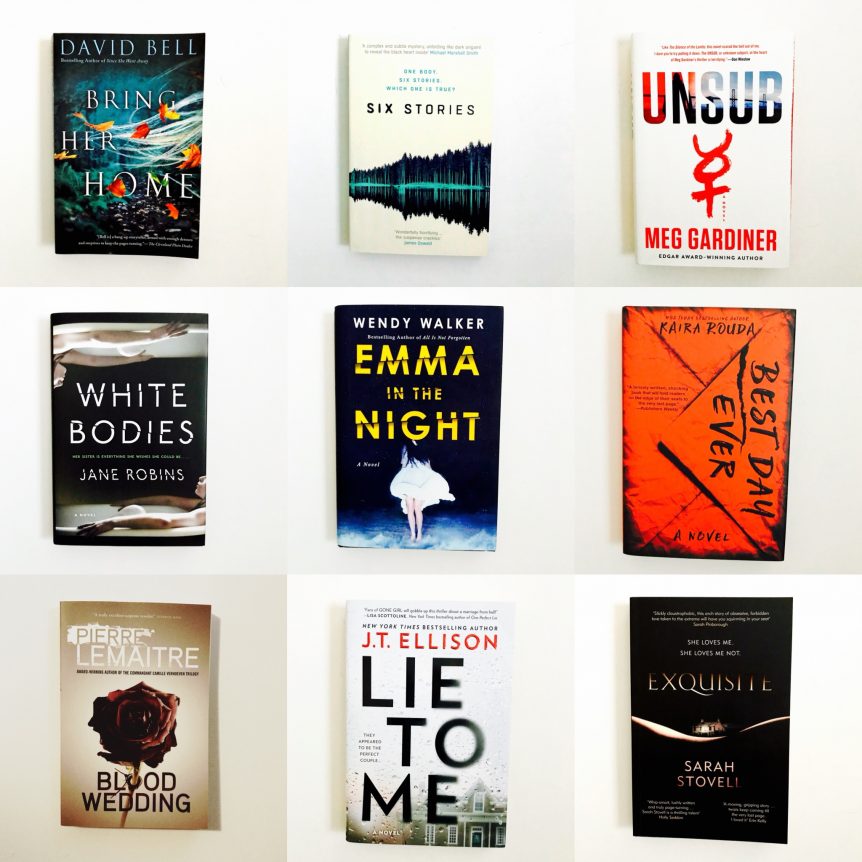 HI BOOK FRIENDS! Here are some of my favorite thrillers of 2017! As you can see here, I am partial to psychological thrillers. This is my favorite genre simply because I love to know why people do what they do no matter how horrific. I am an analytical person so it’s always interesting to see where the story goes and if I can guess the outcome.

What were your favorite thrillers of 2017? Are any of them pictured here?

EMMA IN THE NIGHT by Wendy Walker

One night three years ago, the Tanner sisters disappeared: fifteen-year-old Cass and seventeen-year-old Emma. Three years later, Cass returns, without her sister Emma. Her story is one of kidnapping and betrayal, of a mysterious island where the two were held. But to forensic psychiatrist Dr. Abby Winter, something doesn’t add up. Looking deep within this dysfunctional family Dr. Winter uncovers a life where boundaries were violated and a narcissistic parent held sway. And where one sister’s return might just be the beginning of the crime.

BEST DAY EVER by Kaira Rouda

Paul Strom has the perfect life: a glittering career as an advertising executive, a beautiful wife, two healthy boys and a big house in a wealthy suburb. And he’s the perfect husband: breadwinner, protector, provider. That’s why he’s planned a romantic weekend for his wife, Mia, at their lake house, just the two of them. And he’s promised today will be the best day ever. But as Paul and Mia drive out of the city and toward the countryside, a spike of tension begins to wedge itself between them and doubts start to arise. How much do they trust each other? And how perfect is their marriage, or any marriage, really?

BRING HER HOME by David Bell

Just a year and a half after the tragic death of his wife, Bill Price’s fifteen-year-old daughter, Summer, and her best friend, Haley, disappear. Days later, the girls are found in a city park. Haley is dead at the scene, while Summer is left beaten beyond recognition and clinging to life. As Bill holds vigil over Summer’s bandaged body, the only sound the unconscious girl can make is one cryptic and chilling word: No. And the more time Bill spends with Summer, the more he wonders what happened to her. Or if the injured girl in the hospital bed is really his daughter at all. When troubling new questions about Summer’s life surface, Bill is not prepared for the aftershocks. He’ll soon discover that both the living and the dead have secrets. And that searching for the truth will tear open old wounds that pierce straight to the heart of his family…

Bo Luxton has it all—a loving family, a beautiful home in the Lake District, and a clutch of bestselling books to her name. Enter Alice Dark, an aspiring writer who is drifting through life, with a series of dead-end jobs and a freeloading boyfriend. When they meet at a writers’ retreat, the chemistry is instant, and a sinister relationship develops. Or does it? Breathlessly pacey, taut and terrifying, Exquisite is a startlingly original and unbalancing psychological thriller that will keep you guessing until the very last page.

LIE TO ME by J.T. Ellison

Sutton and Ethan Montclair’s idyllic life is not as it appears. They seem made for each other, but the truth is ugly. Consumed by professional and personal betrayals and financial woes, the two both love and hate each other. As tensions mount, Sutton disappears, leaving behind a note saying not to look for her. Ethan finds himself the target of vicious gossip as friends, family and the media speculate on what really happened to Sutton Montclair. As the police investigate, the lies the couple have been spinning for years quickly unravel. Is Ethan a killer? Is he being set up? Did Sutton hate him enough to kill the child she never wanted and then herself? The path to the answers is full of twists that will leave the reader breathless.

Sophie Duguet–young, successful, and happily married–thought at first she was becoming absentminded when she started misplacing her mail and forgetting where she’d parked her car the night before. But then, as her husband and colleagues pointed out with increasing frustration, she began forgetting things she’d said and done, too. And when she was detained by the police for shoplifting, a crime she didn’t remember committing, the confusion and blackouts that had begun to plague her took on a more sinister cast. Her marriage started to come apart at the seams.Now Sophie is in much deeper water: the young boy she nannies is dead while in her care, a tragedy of which she has no memory. Afraid for her sanity and of what the police will do to her when the body is discovered, Sophie goes on the run, changing her identity and appearance to evade the law. Forced to lead a very different kind of life, one on the margins of society, Sophie wonders where everything went wrong. Still, with a new name and a new life, she hopes that she’ll be able to put her demons to rest for good. It soon becomes clear, however, that the real nightmare has only just begun . . .

Caitlin Hendrix has been a Narcotics detective for six months when the killer at the heart of all her childhood nightmares reemerges: the Prophet. An UNSUB—what the FBI calls an unknown subject—the Prophet terrorized the Bay Area in the 1990s and nearly destroyed her father, the lead investigator on the case. The Prophet’s cryptic messages and mind games drove Detective Mack Hendrix to the brink of madness, and Mack’s failure to solve the series of ritualized murders—eleven seemingly unconnected victims left with the ancient sign for Mercury etched into their flesh—was the final nail in the coffin for a once promising career. Twenty years later, two bodies are found bearing the haunting signature of the Prophet. Caitlin Hendrix has never escaped the shadow of her father’s failure to protect their city. But now the ruthless madman is killing again and has set his sights on her, threatening to undermine the fragile barrier she rigidly maintains for her own protection, between relentless pursuit and dangerous obsession. Determined to decipher his twisted messages and stop the carnage, Caitlin ignores her father’s warnings as she draws closer to the killer with each new gruesome murder. Is it a copycat, or can this really be the same Prophet who haunted her childhood? Will Caitlin avoid repeating her father’s mistakes and redeem her family name, or will chasing the Prophet drag her and everyone she loves into the depths of the abyss?

Felix and Tilda seem like the perfect couple: young and in love, a financier and a beautiful, up-and-coming starlet. But behind their flawless façade, not everything is as it seems. Callie, Tilda’s unassuming twin, has watched her sister visibly shrink under Felix’s domineering love. She has looked on silently as Tilda stopped working, nearly stopped eating, and turned into a neat freak, with mugs wrapped in Saran Wrap and suspicious syringes hidden in the bathroom trash. She knows about Felix’s uncontrollable rages, and has seen the bruises on the white skin of her sister’s arms. Worried about the psychological hold that Felix seems to have over Tilda, Callie joins an Internet support group for victims of abuse and their friends. However, things spiral out of control and she starts to doubt her own judgment when one of her new acquaintances is killed by an abusive man. And then suddenly Felix dies—or was he murdered?

1997. Scarclaw Fell. The body of teenager Tom Jeffries is found at an outward bound centre. Verdict? Misadventure. But not everyone is convinced. And the truth of what happened in the beautiful but eerie fell is locked in the memories of the tight-knit group of friends who embarked on that fateful trip, and the flimsy testimony of those living nearby.
2017. Enter elusive investigative journalist Scott King, whose podcast examinations of complicated cases have rivalled the success of Serial, with his concealed identity making him a cult internet figure.
In a series of six interviews, King attempts to work out how the dynamics of a group of idle teenagers conspired with the sinister legends surrounding the fell to result in Jeffries’ mysterious death. And who’s to blame . . .
As every interview unveils a new revelation, you’ll be forced to work out for yourself how Tom Jeffries died, and who is telling the truth. A chilling, unpredictable and startling thriller, Six Stories is also a classic murder mystery with a modern twist, and a devastating ending.